So here I am back again after small hiatus with another game review, Phoenix Wright Ace Attorney… well it is technically 3 games in one that are based on a game that ended up spawning its own anime show based on the actual trilogy.

Phoenix Wright Ace Attorney is set in a world where the justice system is set in first instance courts and must reach a verdict within three days. Phoenix Wright is a rookie defense lawyer who works under his mentor, Mia Fey. I’m not one to pass up a good crime show drama especially if given the chance to do my own law and order “Dun Dun” sound at random intervals, which I found myself doing a lot in this game. More on that in a bit.

Starting the game, I was introduced to my character Ace, who I found to be a bumbling idiot while being guided by his mentor Mia, in your first case.

Getting into it, I need to say that being a lawyer & proving my client’s innocence appealed to me, sadly that was not the case. You start the game by selecting the one of the three games in the series. If you have not played any of these yet, I suggest you start with the first one as there is an interconnecting story between them.

The game quickly becomes a “pressing (A)” simulator. There is a lot of this. I found myself working my way through the text boxes that appeared on screen resulting in the need to turn off the sound effects. This is because every letter typed in the subtitles was accompanied by a ding or beep which got annoying extremely fast! There is no option to only turn the text noise off, it is all or nothing. This resulted in playing in silence, almost. I now noticed the background music constantly repeats the same tune over and over. Looking for some solace, I figured that this is the first game & maybe they improved or changed on the subsequent games… Unfortunately, no. It’s the same on all 3. It is almost as if they took all 3 games from the Nintendo DS and just did a copy & paste for Xbox.

The gameplay is much like an animated anime comic book with big hit boxes appearing every time you have an objection. Since I was playing this in silence, it was these moments I found myself making that familiar and distinct “Dun Dun” noise during the trial and basically whenever the screen changed.. “Dun Dun”.

The controls are extremely basic which involve mostly pressing (A) repeatedly. As I progressed through the first chapter which is essentially a tutorial level, I had to work my way through the case having the basic controls explained to me as ‘(A) is the button for most things’ while moving through the case. Mia pops up from time to time saying (RB) to view evidence. And by view evidence, I mean I got to see a picture of it with no ability to interact with it at all. This tended to make the cross examination a more difficult than it needed to be. As I would catch a lie, I would go to provide my evidence while not always being sure which to choose. Although choosing wrong never ended the case, the judge would move his lips with the text saying “that’s invalid choose again” with no penalization. Eventually I got to the point of feeling like nothing I did was punishable. I then began choosing randomly just so I could get the deal over an done with.

There is none whatsoever though I feel like they could work out how to set up a match between myself vs another player. Proving a client’s innocence or guilt against another live player is something I think would be an enjoyable addition to the game. Phoenix Wright Ace Attorney is an eastern game partially adapted for western players, but more and more games of this style are making thier way to the mainstream and this is a good thing for the industry as a whole. Subtitles accompanied by a ‘morse code’ sound mixed with the same tune repeating over and over is not for everyone. It began driving me nuts almost immediately. It really is as if they’ve taken the DS version of the game, ported it to the Xbox in its current state & dusting their hands off like job’s done.

That said, hardcore Phoenix Wright fans from the DS are sure to love replaying it on a more powerful console. New players like myself while most likely find it bland and plain like a home brand curry. 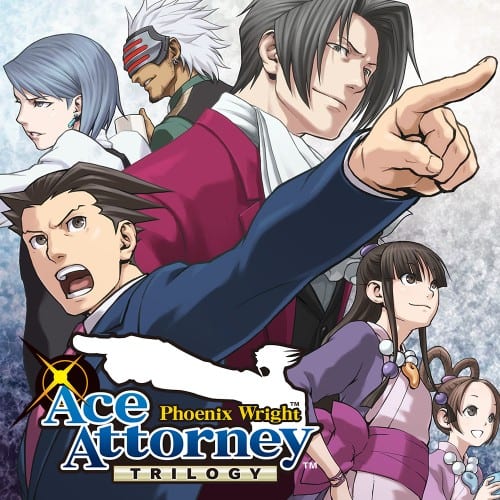 Defend the innocent and save the day! Courtroom hero Phoenix Wright lays down the law this Winter in the digital release of Phoenix Wright: Ace Attorney Trilogy.