By HadesTheHobo on November 7, 2020 on Reviews, 5 More
close [x]
Tweet
No Comments

Pikmin 3 Deluxe is Nintendo’s latest creation to be ported from an older system into the newer gaming age. Having been released on the Wii U in 2013, Nintendo obviously believed that Pikmin 3 was enough fun that it could only benefit the newer hybrid gaming style of the Switch. I would have to say I agree with them.

The Nintendo Switch is fast becoming a must-have for all Nintendo lovers. Sure, these sales have probably boomed thanks to the excessive downtime people have had over the COVID era, however, it is also due to the almost perfect combination of playability on both the large screen at home and the handheld screen when out and about. Pikmin 3 Deluxe brings with it additional side missions, playable characters, and, best of all, the ability to play with a friend. Unfortunately, I have no friends, but I’m going to do my best to jump in and see what’s on offer.

For those unfamiliar with Pikmin, they are a tiny plant-like species that come in various colors and live within oddly shaped onions. These little critters have a different set of abilities depending on their color, they eat nectar, and they grow from little buds to beautiful flowers, all whilst maintaining a high level of adorability. They multiply by returning materials back to their onion, which then sprouts new leaves to be plucked, adding to your ever-growing Pikmin army. 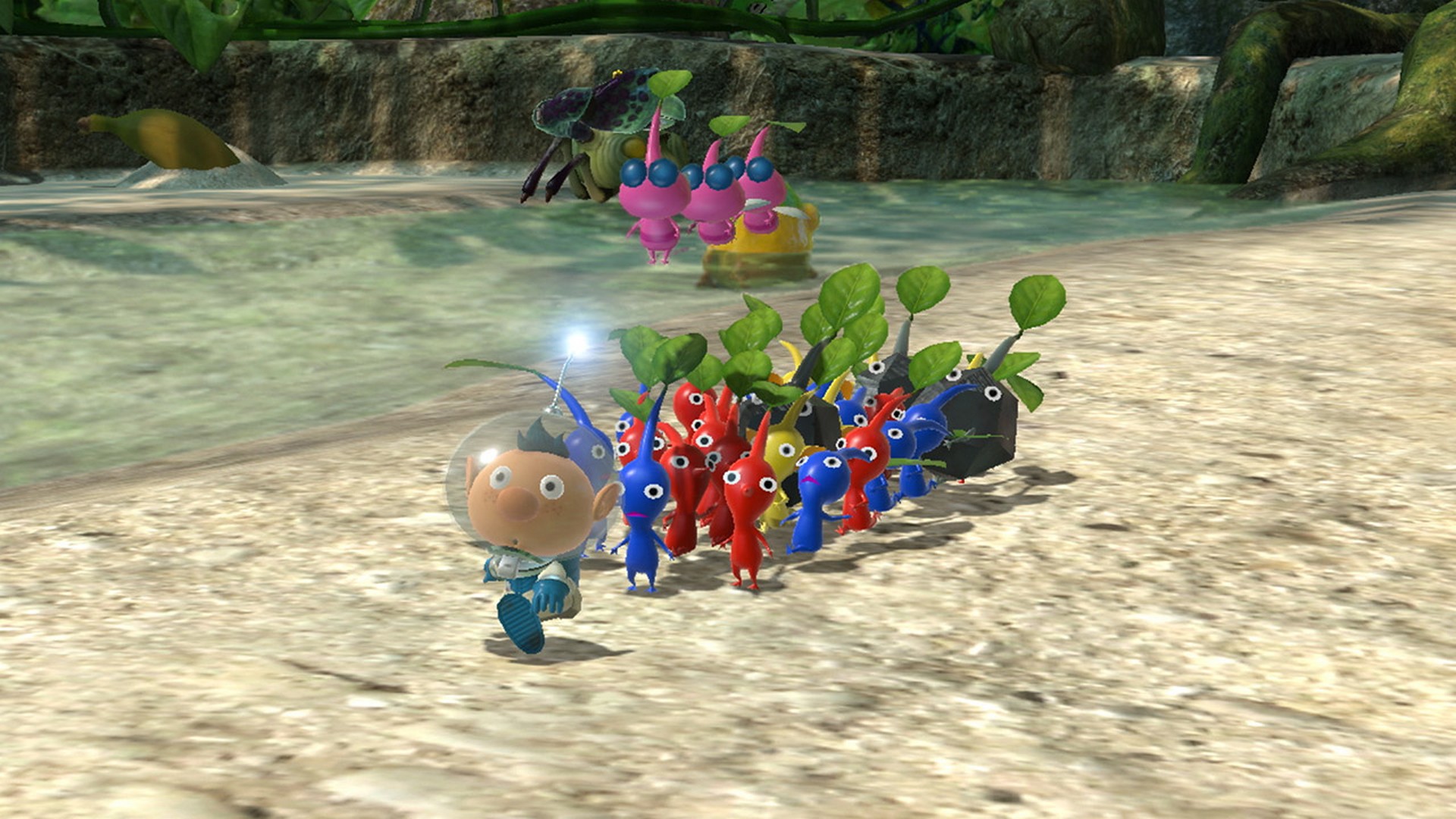 Pikimin 3 Deluxe is the story of the planet Koppai on the brink of starvation, launching probe after probe to other planets in order to find food to save its people, each one unsuccessful in finding the required food sources, until the discovery of PNF-404. They quickly launch an exploration mission with 3 of their explorers crash landing on the planet. Here starts the mission of reconnecting with the other explorers, meeting and strategically utilizing the Pikmin to maneuver around the obstacles, find the food sources that will save the Koppai home planet, and fight off your own impending starvation in the meantime. Although contrary to Brittany’s belief, I don’t think it’s ever dire enough to ignore the cuteness of the Pikmin!

The concept of Pikmin 3 is really breaking down the collection and micro-management of the Pikmin. You get handed a varying number of the different colors, which you must then use correctly as per their ability; for example, sending the reds to battle as they are fireproof, or sending the rocks to smash glass and crystals. You can separate these groups into smaller numbers and send them off on their own tasks, or you can use them all at once to get a task done quicker. Once you reconnect with the other explorers, you can use them to separate the Pikmin over greater distances and really start filling up on all the…fruit.

That’s right, folks. All this hard work, this massive journey over millions of light-years, this potentially suicidal plunge into the depths of the unknown, turned out to be for some fruit. I’m disappointed too, but at least it’s GIANT fruit. These bad boys are at least 3 times the size of the Koppai, so I’d say it could definitely save the population. 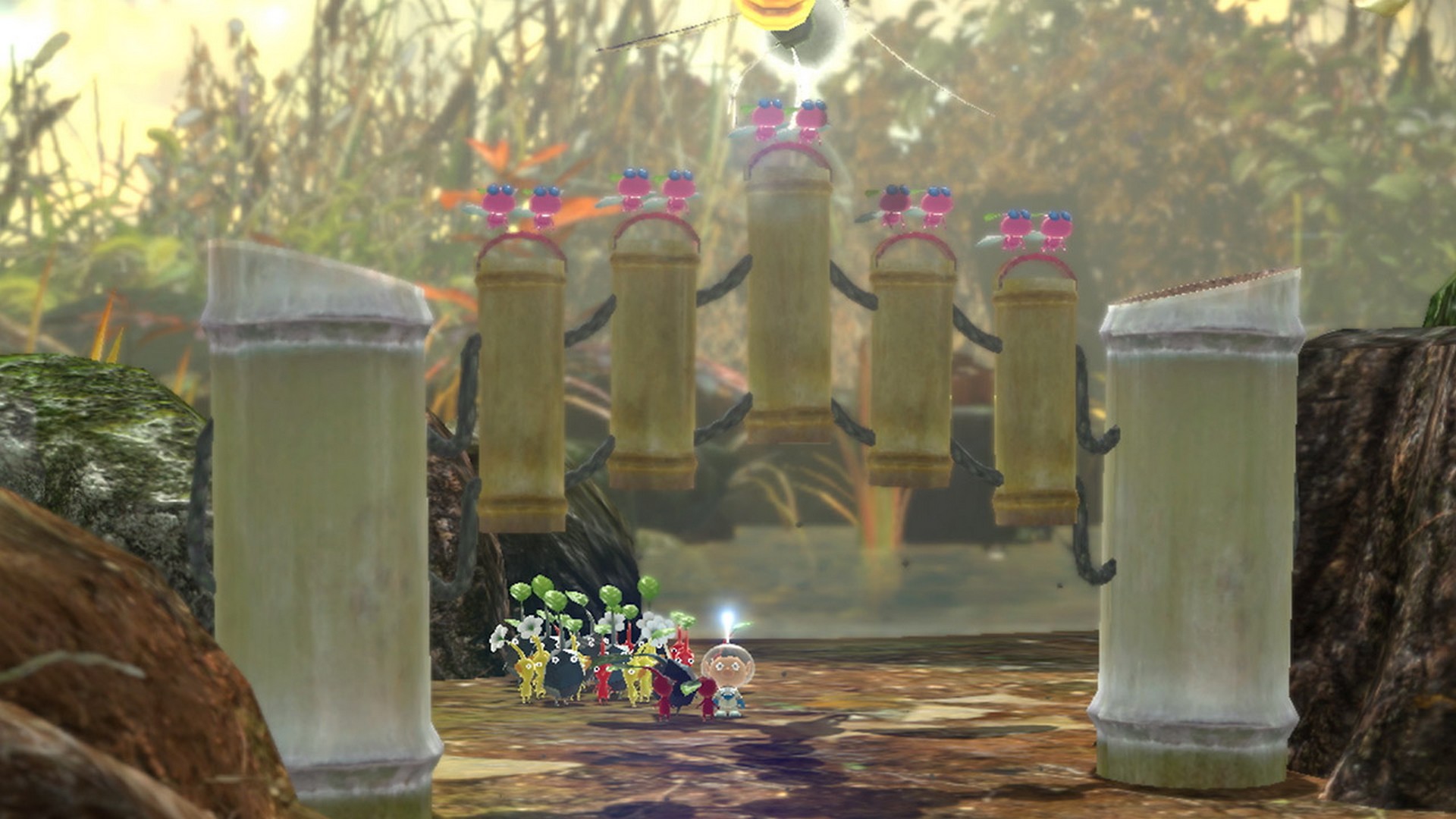 The controls take a bit of getting used to, but I guess it’s not the most common gameplay style. Once you get the hang of it though, it’s actually rather smooth and enjoyable. Being able to swap characters is a great way to expand how much territory you’re covering, and a great addition to the game.

As I’m finding with more and more re-releases, the Pikmin 3 Deluxe release has also given players the ability to change the difficulty level. This was my first run-through of a Pikmin game, so I stuck with the easier option for now, but you can be sure I’m planning to find out what hard is like in the future!

I found Pikmin 3 Deluxe to be a lot of fun, with just enough mental energy required to keep me thinking, while being easy enough that it will entertain players of all ages. Unfortunately, from what I’ve heard, the extra side missions are about all that varies from the original game on Wii U, so if it’s new content you’re after, it may fall short for the more experienced Pikmin players.

Overall, a good mix of relaxation, strategic gameplay, and adorable little characters. Although, they are actually super annoying when you throw 50 at one time. I would definitely give Pikmin 3 Deluxe a thumbs up, and recommend giving it a go. 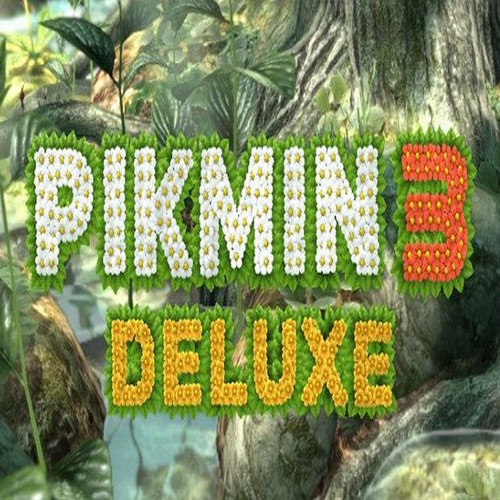 Command a capable crop of tiny creatures and explore a hostile planet in this exciting blend of action and strategy. Seek out valuable items, solve puzzles and overcome powerful creatures in a richly detailed world full of surprises!