“It is the heavenly fount from which pours the light that shines across Hisui. Its luminance guides and protects all Pokémon. Hisuian mythology states that Arceus is the creator of all things.” This is the Data entry for the mythical creature known as Arceus. With Arceus being the frontrunner of their very own Pokémon game, Pokémon: Legends Arceus. Developed by the Pokémon Legends Gamefreak, and published by Nintendo and The Pokémon Company, Pokémon: Legends Arceus is the newest installment to the franchise and sets us back in time to a very early iteration of the once known Sinnoh. For those of you who don’t know, Sinnoh was the region we ran through in the Pearl/Diamond/Platinum games. Pokémon: Legends Arceus is out now for the Nintendo Switch.

Welcome to Hisui, a peaceful region on the precipice of evolution. However, not much is known about this land and its inhabitants. Thrust down from the heavens, through time and space, a lone adventurer gets sent to Hisui by the Pokémon God Arceus themself. The main settlement in this historical period is Jubilife Village, home to the “Galaxy Team.” Within this team are many groups ranging from construction to surveying, and you find yourself enlisted to the survey corps where it is your sole duty to study, discover, and understand this ever-evolving land around you.

People who have arrived in this region have never seen Pokémon before. They don’t understand them and are scared of them. It’s your duty as a member of the Survey Corps to study these wild creatures and aid in building relations between Humankind and Pokémon. However, some Pokémon have become corrupt with power, and as noble Pokémon, symbolic to the other clans in the world, they are not simply removed from play as symbols and being precious to those around them. You must quell the nobles and calm their sudden outbreaks, all while attempting to understand why you were sent here, how you got here, and why Arceus chose you.

Pokémon: Legends Arceus, the highly anticipated and latest Pokémon game to release is finally here, and I had the pleasure to pump many an hour into it. GameFreak has completely, and I mean COMPLETELY, overhauled Pokémon as we know it. In your standard Pokémon games, whether it be the OG Red/Blue, or your more recent Sword/Shield, the aim was to become a Pokémon Master, defeat everything in your path, the Elite 4, your noodle-armed rival, and so-called trainer or legendary had nothing on you. Completing the Pokédex felt additional most of the time because the rewards for doing so felt like the effort put in was not well spent. 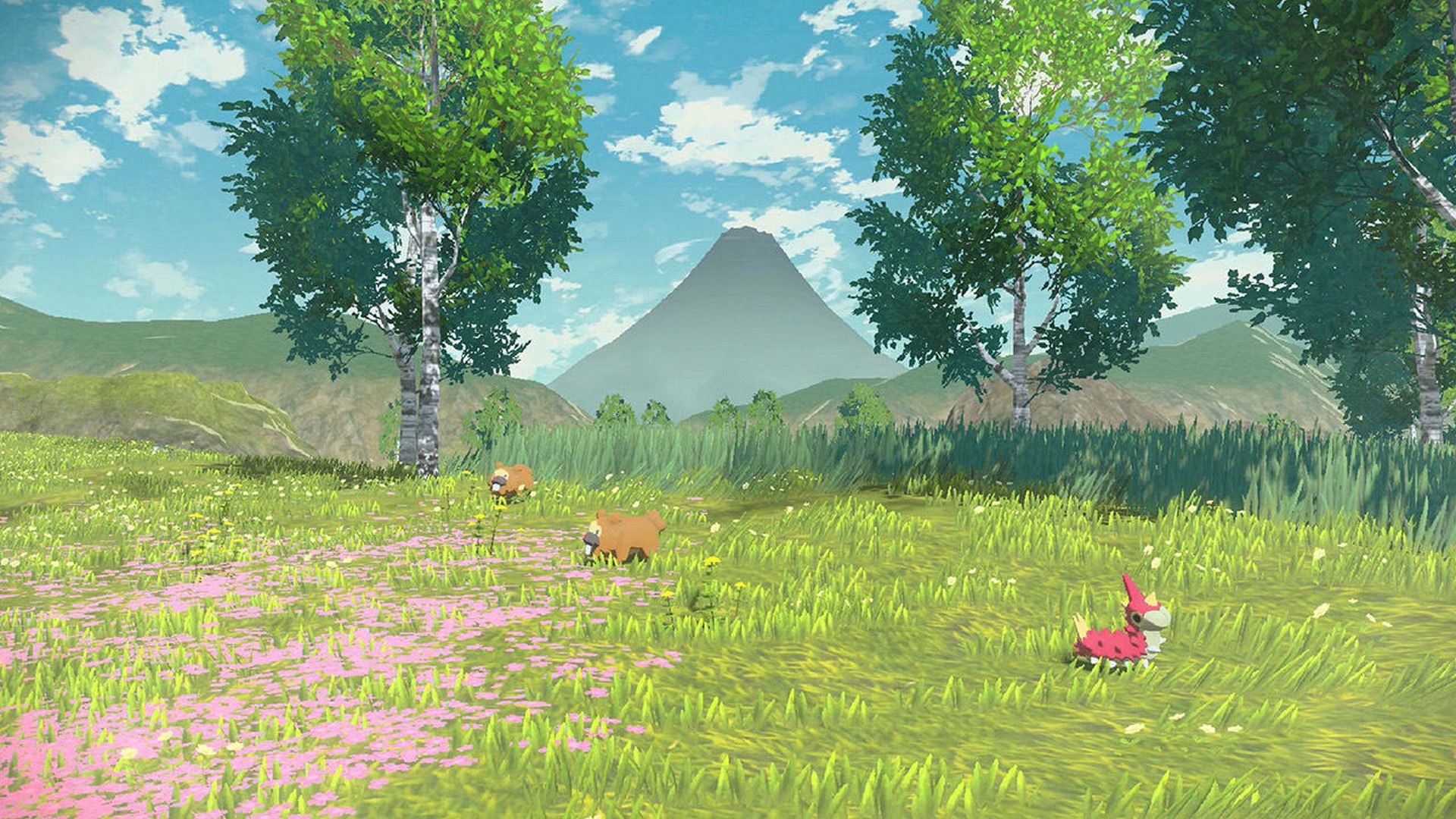 However, in Legends Arceus, to complete an entry into the ‘Dex you must not only catch a species but study it by defeating them, watching them use their moves, evolving them, catching them without being seen, or even just feeding them. The basis of the ‘Dex and filling it out is research and to fulfill the ‘Dex entries you must acquire 10 research points. Some paths have are worth double to make it less tedious, however, if you were to fulfill every pathway and obtain a perfect page, this will significantly increase your chances to find one of those super aesthetically pleasing shiny ‘Mons.

Catching Pokémon has been entirely revamped as well. You don’t have to engage in a fight to catch pokemon if you don’t want to. You can simply sit in tall grass and catch the Pokémon on the other side. Weird I know. It’s like the roles have been reversed. Some Pokémon are aggressive and will attempt to initiate a battle as soon as you are spotted, whereas some are more skittish and will run at the first sight. Battling wild Pokémon is much the same, in that wild Pokémon who tend to run when seen will attempt to run from battles, and aggressive Pokémon will stay and fight until the bitter end.

Pokéballs and their catch rates have been fully changed as well. When launching a ball on an unaware Pokémon and from behind, it’s like hitting their sweet spot and the catch rates are increased. There is a button combination you can use to check how difficult a Pokémon is to catch, but I never really used this past the tutorial as just throwing a basic Pokéball at a level 30 ‘Mon seemed to usually catch it first try. There are some supplementary items to assist in capturing all those Pokémon, like stealth spray, berries, smoke bombs, and mud/snowballs, but again, I felt like I didn’t need to use them, and if they didn’t want to be captured I felt like they had won the right to be free. Along with the fully open areas and free-roaming Pokémon, YES! You read that correctly, Pokémon are free to roam to their hearts’ content, and although it was very special to watch a group of Bidoof roam around together and boop each other as they walked past all while making their cute little noises, my missions had to be done. This was until in true RPG fashion I got fully sidetracked by all the optional tasks, filling in the Pokédex, and exploring. 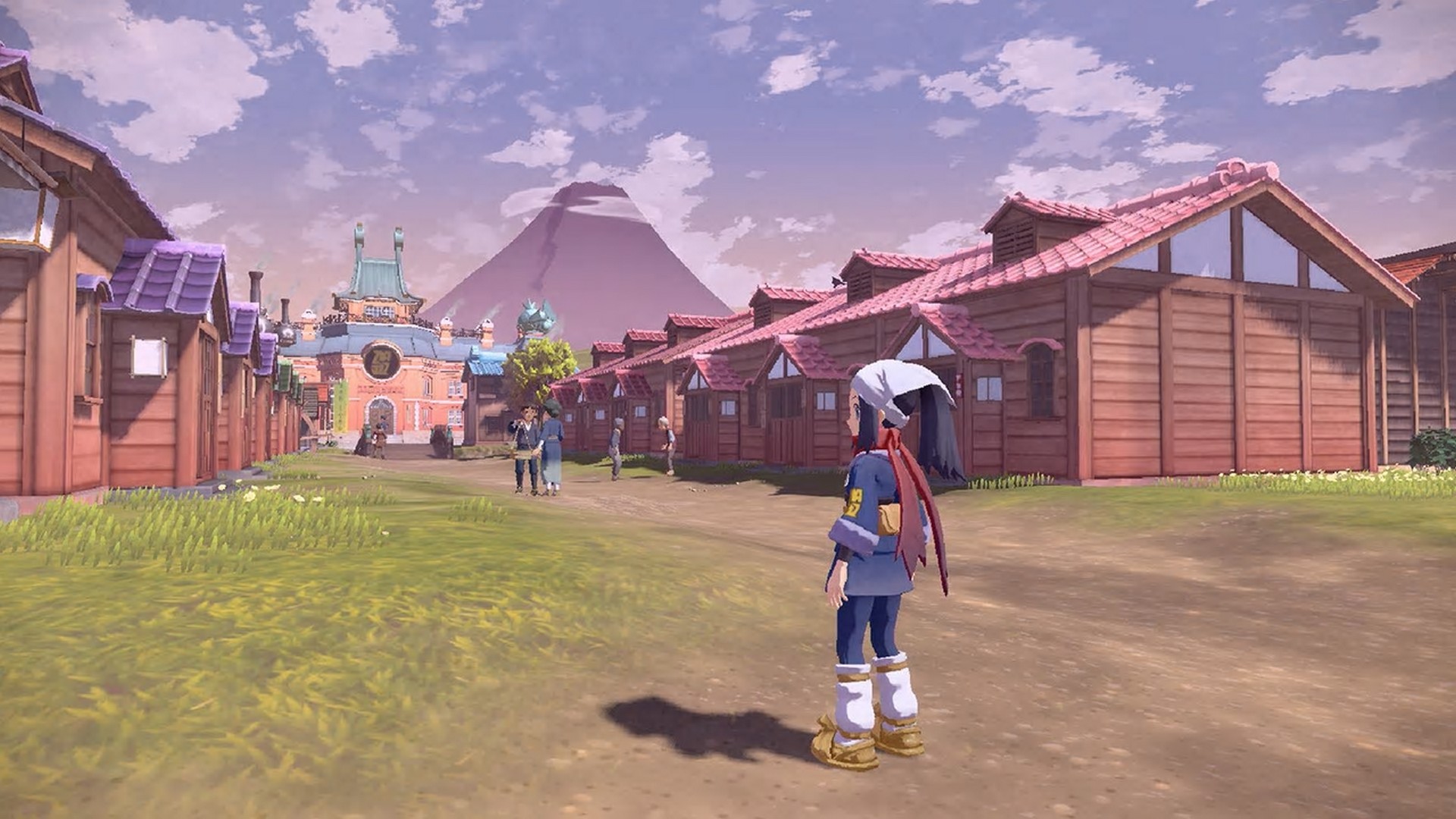 I ran into a real monster, this creature stood well above its peers, it had glowing red eyes and what could only be described as a smell of death emanating from it. There’s nothing scary about a Wurmple, but one that stands as tall as you and just screams instilled pure fear in me. I had to have it. Alpha Pokémon is another new iteration in the game. These versions are much bigger, much stronger, and much much more fierce. They also sit quite a few levels above anything else on the map. Through my journeys I found that most are static spawns, however, there is a chance to encounter them randomly through the world. Although these Alphas are 10x stronger and are a huge help throughout the game, approach them with caution – they can wipe your team within seconds.

Upon losing all usable Pokémon you no longer blackout. Instead, you can run to safety to revive and heal to fight another day, however, the wild Pokémon will attack you and if you get hit too many times you will pass out and return to camp. Pokémon Battles have been altered as well, with the introduction of Move Mastery. When a Pokémon becomes proficient in its skill, it will master a move. This means it can use an Agile or Strong mode. The Agile move does less damage but alters the turn order to place your move higher in the queue. The Strong mode has the opposite effect; it does more damage but puts an upcoming turn lower in the queue. Both styles of moves use double PP and if used effectively can cause devastating effects.

On your journeys, you will encounter a vast amount of resources, which you can use to craft most items, as long as you have a recipe for them. This made long excursions a sinch. Running low on meds or balls? Simply get to a safe place and craft some. No need to return to town or go through a huge amount of dialogue to misclick and end up canceling the order or accidentally buying the wrong things. Personally, I was a huge fan of all these new changes. It made the world feel lively and the game flowed flawlessly, there wasn’t a moment where the immersion was ruined or anything felt flat and boring. There was always stuff to do, and that is just the icing of the cake. 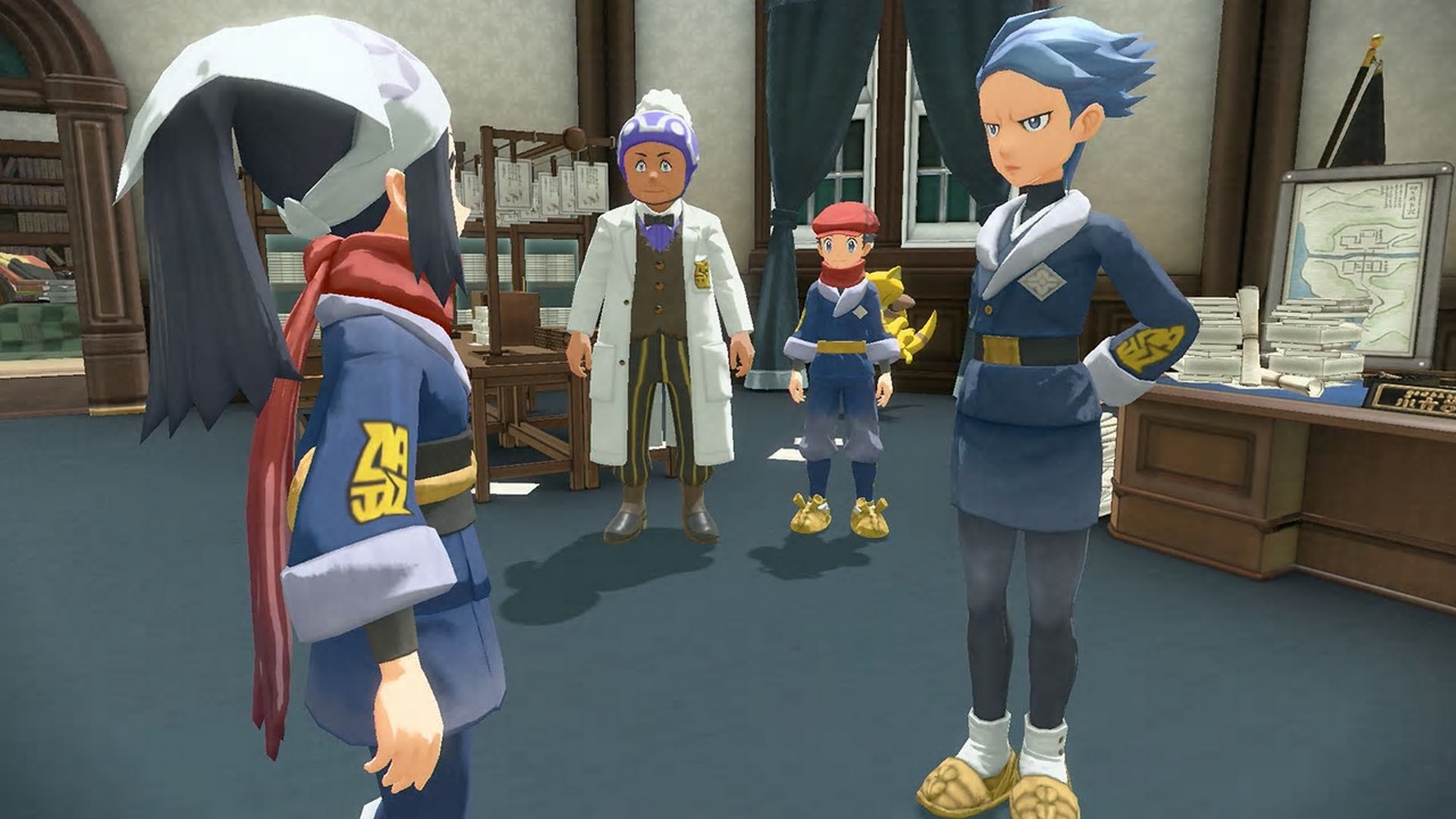 The land of Hisui was simply stunning, with vibrant and contrasting colour palettes making every area pop. Having the Switch docked and running on a big screen wasn’t the greatest though, as the game doesn’t scale well, however, using it in handheld mode, the game simply looked beautiful. The only downside was with handheld mode couldn’t set it in a way where I could comfortably see the screen while laying on the couch with the JoyCons. Playing the game with it set in full handheld mode felt awkward. I think this is just me with my limited amount of time to become adjusted to using the Switch handheld. Having the JoyCon Comfort Grip made controlling the game seamless and a lot more comfortable. It made aiming the Pokeballs to be thrown feel more accurate and movement felt easier. I would recommend using one of these or a pro controller.

With the region of Hisui being Historic, the feudal design and craft mentality of the areas fit perfectly, from the NPC’s clothing being thrust around feudal times and the lack of technology, the devs did an amazing job of making it feel like you did indeed go back in time. The backing audio was extremely fitting as well, from the chill vibe tunes that play in the village to the inspiring tune that plays when exploring, all the audio fit the game perfectly, however, nothing beats the fact that while exploring you could hear distant calls from wild Pokémon, further adding to the liveliness of the world. Out of everything audio and graphics-wise, I found the best to be the battle animations, Pokémon battles have never been so good. I did, however, find fault with the camera. I found sometimes while turning or manoeuvering around that the camera would do a sudden 180-degree turn, and during some battles, if your character was too close the “widescreen bars” would cover the enemies name and health bar, making you have to move out of the way to see how the battle was going. Fortunately, you can free roam around the battle to get a better perspective, although if you strayed too far the battle would cancel.

Pokémon: Legends Arceus has been by far the best 3D Pokémon game I’ve played. Even while writing this review I can’t put the game down. Although it does have a few issues including the camera placement during some fights, and a sudden 180 of the camera when moving, I spent well over 24 hours playing through and only just finished the amazing story. From the new game style to the amazing animations and all the things to do I was hooked. I had Pokémon fever. I couldn’t stop thinking about it. I highly recommend this to any Pokémon lover, old or young, veteran or rookie, this game caters to all. 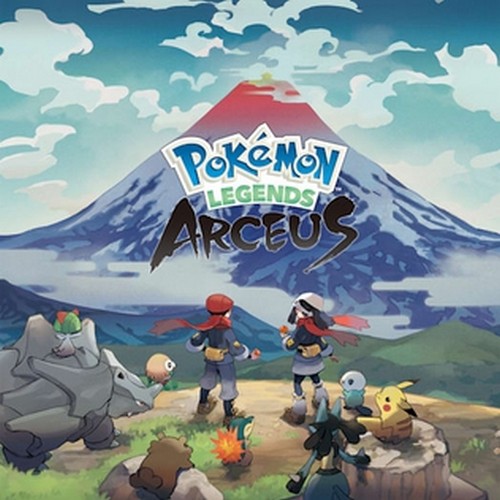 Get ready for a new kind of grand, Pokémon adventure in Pokémon™ Legends: Arceus, a brand-new game from Game Freak that blends action and exploration with the RPG roots of the Pokémon series.