Tom Clancy’s Rainbow Six: Extraction is a three-player co-op game by Ubisoft, coming to Xbox One, Series S|X, PlayStation 4|5, PC, and Google Stadia on the 20th of January 2022. Xbox Gamepass users will also see it on day one, and it will feature crossplay and cross-progression.

There is a massive difference between Extraction and Siege, mostly by having the main focus on PVE. In fact, there is no PVP. Players will squad up as a team of three to engage with an alien threat while securing vital data and rescuing important targets from danger zones, so moving as a team and staying silent is highly expected. Extraction follows the story of an unidentified Russian Soyuz capsule crashing in the city of Truth or Consequences, New Mexico, and triggering an epidemic. Rainbow HQ is quick to respond as they launch Operation Outbreak to research and contain the outbreak while planning for future threats. A new task force was quickly created, codename REACT, with the purpose of containing similar outbreaks and gaining more information to help fight back against the new threat.

Extraction does feature cutscenes that will provide major plot points, but the CODEX will be the main anchor point for the story and in-depth background of the events that had happened, giving players a roster of enemy types and mutations they can expect to come across out in the field. The REACT team is made up of 18 operators from Rainbow Six: Siege, and you will unlock the full roster of playable characters as you level up. This is done by playing Incursions and completing challenges, known as Studies. Each outbreak location you will visit is broken down into 3 levels offering 12 maps to play across, and when you load into a level you are given three objectives to complete, with each playthrough offering different missions and spawn points.

Objectives will feature tasks such as killing or capturing high-value ARCHÆAN targets, marking and destroying Nests for research, planting bombs to destroy Parasite Towers that will allow Nests to respawn or rescue missions to find and extract science staff being held within the level. If you and the squad are feeling the pressure of low health and ammo, you can extract after each objective and still gain rewards and experience, but the rewards are significantly increased if you complete all three. Each objective is separated by a safe room or subzone, and more often than not these rooms will have ammo boxes or medkits, but it would pay to not count on it. It’s best to extract when you and the team feel like you have done as much as you can, otherwise, you may lose the operator. 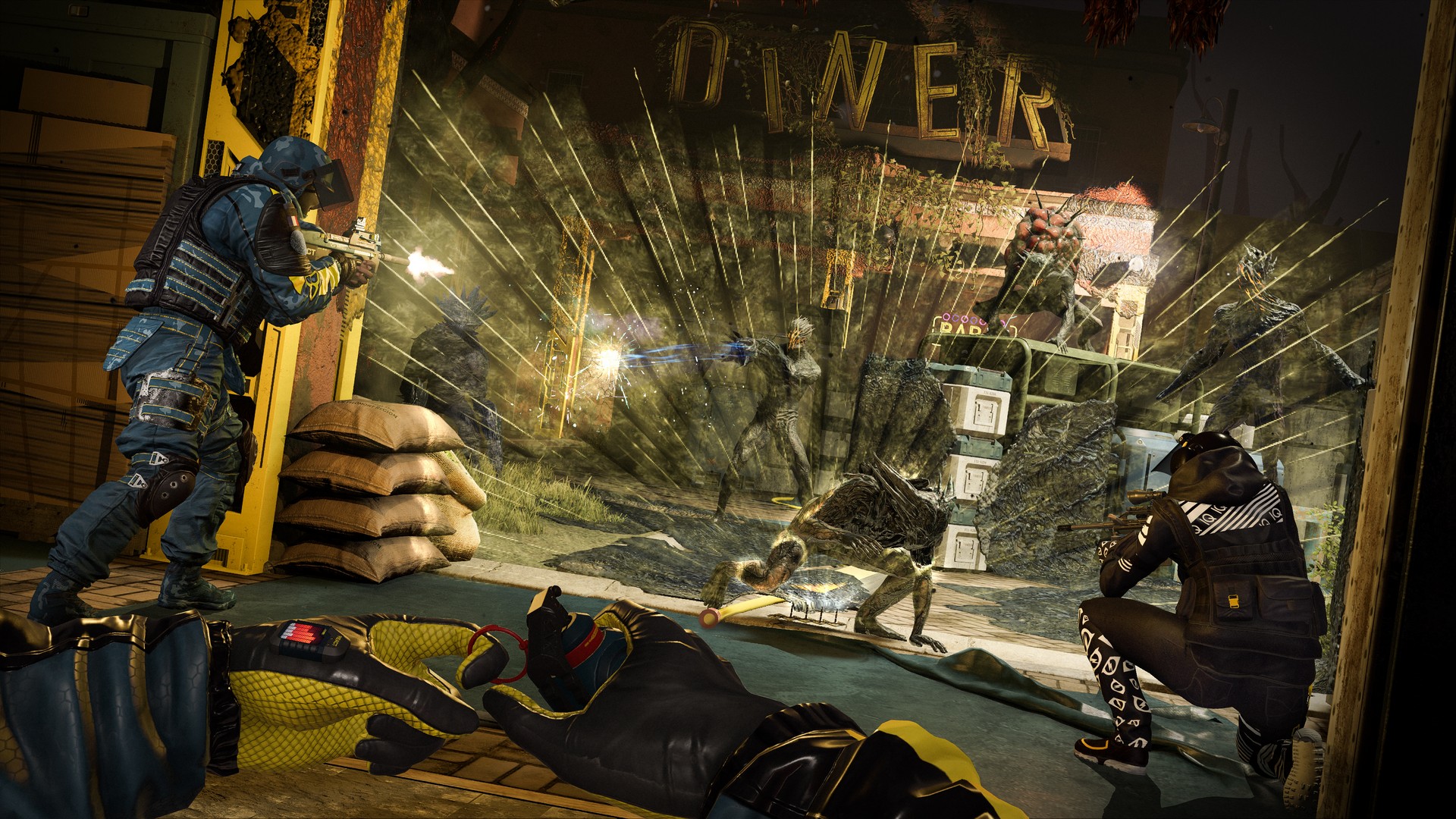 There are additional objectives that can only be found when certain conditions have been met, such as the MIA Rescue, so if your team goes down don’t worry, you will have a chance to recover the operator by going back into the same zone. The other objective that can change mid-round is No One Left Behind. If a player is downed and can’t be revived, the surviving players will be given the task of extracting with your newly cocooned body, only becoming an MIA target if the downed player is left behind.

In addition to these two extra objectives, you will have to keep the operator healthy and ready for duty. If they were recused after either being downed or recovered from MIA status, they will be out of action until their health is back over a certain point, and recovery is based on how much experience you earn while they are in recovery. An early extract could get your preferred operator back into the fight quicker. Leveling up operators was nicely balanced; they ranked up rather quickly the more you were successful with them.

New tech gadgets have been created to assist the REACT team, with items such as a self revive needle, so when you are down but not out, you can pick yourself up with a small bar of health. Another health-related tech item will slowly bring you back to half health. You’ll have impact grenades, standard fragmentation grenades, and a lovely new item called the Explosive Harness, increasing your carry capacity of explosives. A quick stand-out loadout for gadgets that I run with all the time is stun grenades or paralysis grenades as they both will stop an enemy in their tracks and allow you to perform a takedown. It is very handy for higher-level threats. The new XR Recon Drone is like the normal drone but it will automatically scan objectives, supply boxes, and enemies through walls within an 8-meter radius, and has a cooldown time of 30 seconds. It is ideal for finding certain targets right away, though, by default, the operators will have flashlights that are used to see the targets through soft walls if they are close enough. So, plenty of load-out options and a large range of tech gadgets to suit any play style.

The new threats in Extraction are the Chimera Parasites. The Sprawl is the most common parasite you will come across which is a cluster of cells that can be found on the floor, walls, and ceilings of levels, and it will slow you down if you walk through it. Fortunately, it’s easy to spot and you can clear it by shooting or punching it. It’s a bit more of a threat if you play at a higher difficulty, as it will slowly damage you as long as you are standing in it. Nests are respawning anchors for the ARCHÆANS so if you are spotted and have the enemies attacking you, Nests in the immediate area will activate and start working on spewing out more ARCHÆANS to attack you, so find and destroy them fast. Finally, the ARCHÆANS are the enemies you will be engaging. They are still considered a parasite but have evolved beyond needing a host. They come in all fun shapes and sizes and come in a 4 tier setup. 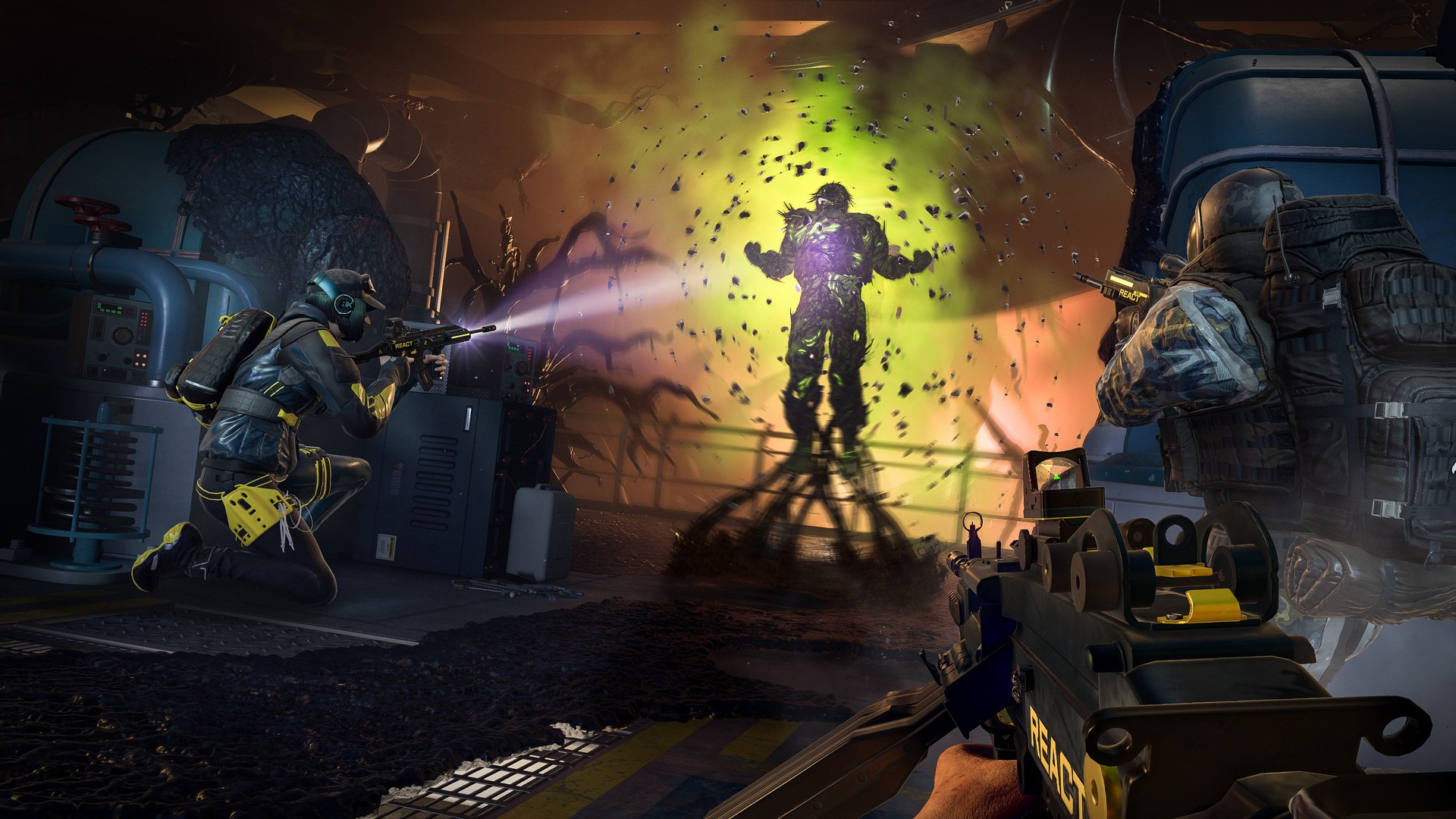 Tier 1 introduces four of the most common enemy types you will encounter. The Grunt is the basic melee enemy you find. They are very humanoid-like in appearance and will only have melee-based attacks. The Spiker is a mutation of the Grunt with a new visual look, with spikes coming from the head and forearms these enemies can attack you from range. Bloaters and Breachers are the last two within tier 1 these two are near-identical. They both crawl around with a fluid sack on their back. The Breacher’s contains a red fluid that will cause an explosion and they can self-destruct next to soft walls. The Bloater’s fluid sack is green and holds in a poison gas which they can trigger by blowing themself up like the Breacher.

Tier 2 introduces two types; the Rooter which gets around on all fours and has an armoured head, attacking and immobilizing players at range. The Sower is very similar to the Rooter in visuals, just a smaller frame and doesn’t attack directly. It is more of a trap placer as it places flash bombs on the floor that will trigger via proximity motion.

Tier 3 brings three big heavy hitters into the fold. First up we have the Lurker it has the same build of a grunt just the head is more unique with a flower-like armour that closes over its head and blooms open. The Lurker can make itself and other ARCHÆANS in the area invisible which makes up for its less aggressive nature. The Smasher is the big threat that tier 3 holds as it is a larger type enemy fully covered in armour from the front. Given its size, the Smasher is very fast and should not be treated as a slow target. It will have a charge attack that will hit hard if it lands on an operator. Finally, the Tormentor is my most unliked enemy to fight due to how it plays. The Tormentor spreads Sprawl where ever it travels which it uses as a method of moving around. During combat, they have fast ranged attacks and can be tricky to keep locked down as they shapeshift into the floor and pop up anywhere around the place.

Tier 4 has a shortlist as it only has one new enemy type; the Apex, and given the name, yes you are in for a hard fight. The Apex is the only enemy type that looks like it has a visual gender. She takes on the combat aspect of a Tormentor with fast ranged attacks but the real threat is that she can summon other ARCHÆANS by her side to fight. Being quick to take down this target is ideal.

Another enemy type that is not part of the tier system is the Protean. These are ARCHÆANS that have mutated further than others and they will mimic 1 of 3 operators. This will be classed as a separate fight with a fresh 10 min timer to beat, so you may end up fighting a Protean that is copying the roles of Smoke, Sledge, or Alibi, each a major threat and they will push the 10 min fight down to the bones. Good luck. 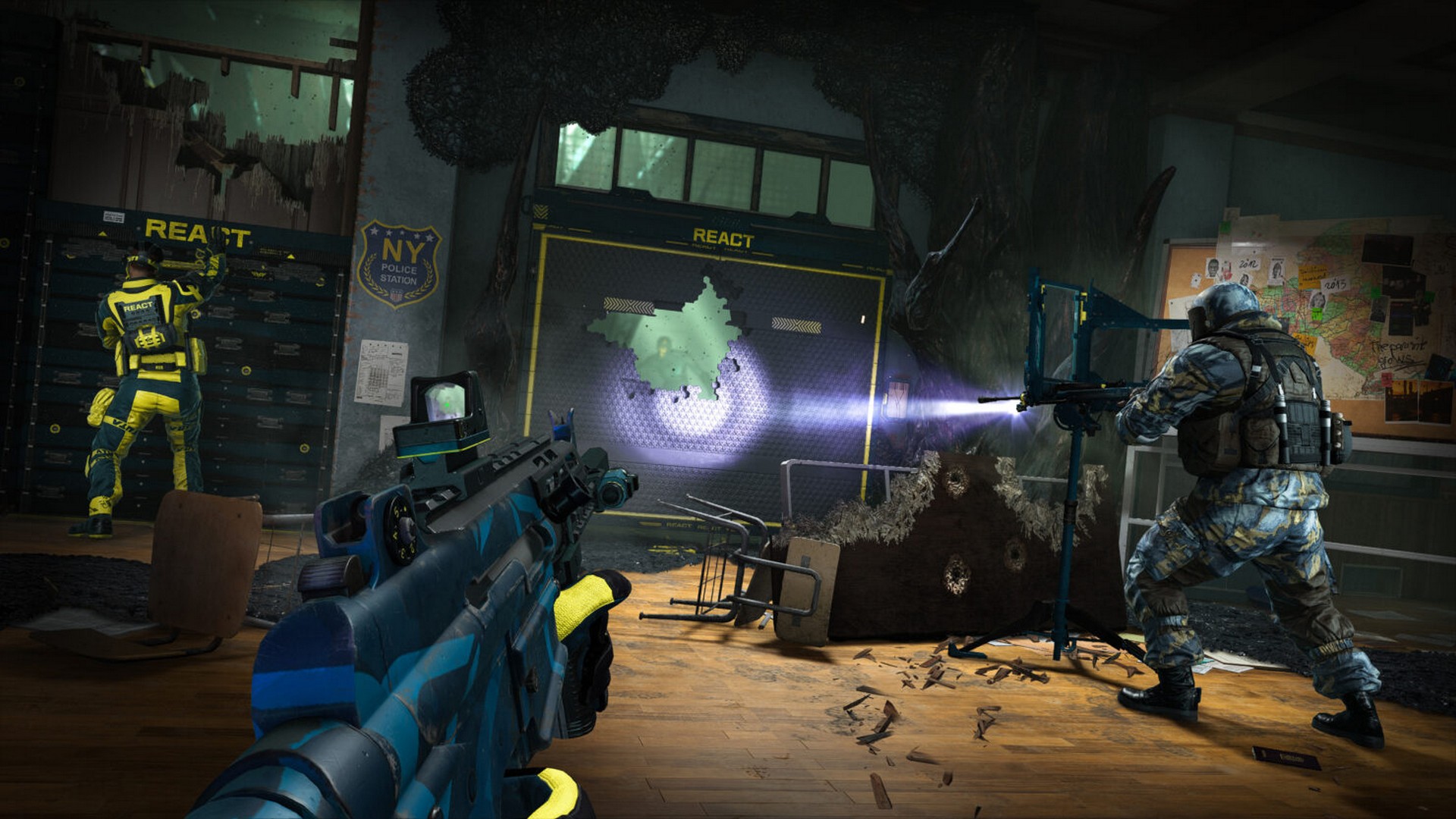 Two endgame modes will keep the players challenged with a weekly rotation. First, you will unlock Assignments, and this mode will put the players to the test by placing new rules of engagement each week, such as “Veteran”, where friendly-fire will be active, or reloading punishments that toss the whole magazine if you reload after a single shot or a minimalistic HUD.

“Wall-to-Wall” will feature more ARCHÆAN than normal. The difficulty raises over time and airlock rooms are locked down by a security panel that first needs to be used, and “Kick the Ant Hill” is the last of the assignments. This is more for full-on action as the ARCHÆAN are packed into smaller areas, the Nests are already alerted and will be spawning more enemies into action, so breach and clear as fast as possible to get past this challenge.

The big endgame content is the “Maelstrom Protocol”. In this mode, you will be graded a rank which will then unlock extra cosmetic headgear, but the challenge is that each week, only six operators will be available to partake in this mode and you will need to clear nine objectives in a full run, so no early extractions are possible. As you complete each objective, the overall time to complete the mission is lowered and the enemies get harder, so it will truly put the skills of any team to the test, so good luck operators, you will need it. 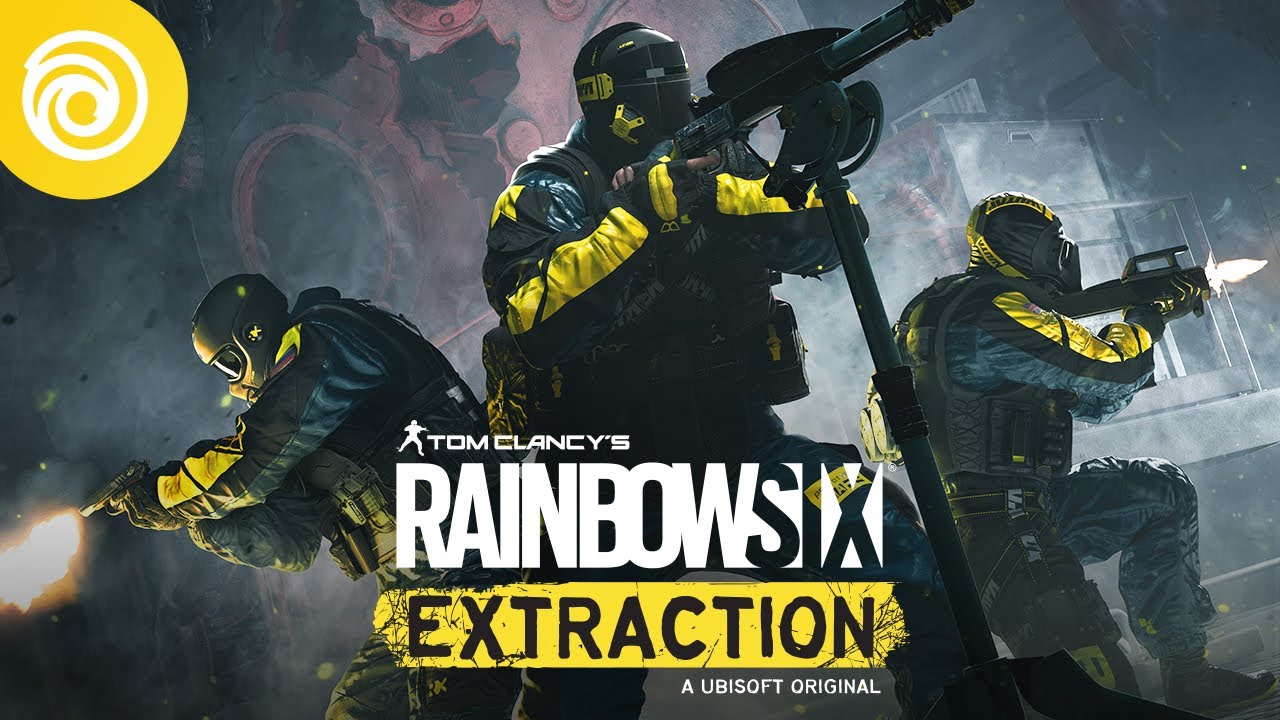 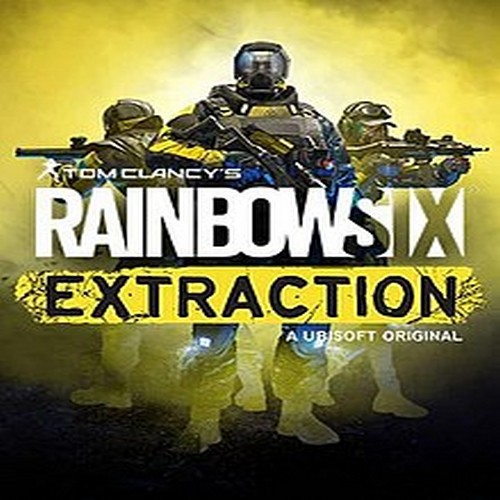 The elite Operators of Rainbow Six are now united to face a common enemy: a highly lethal threat known as the Archeans. Assemble your team and risk everything in tense incursions in the containment zone.