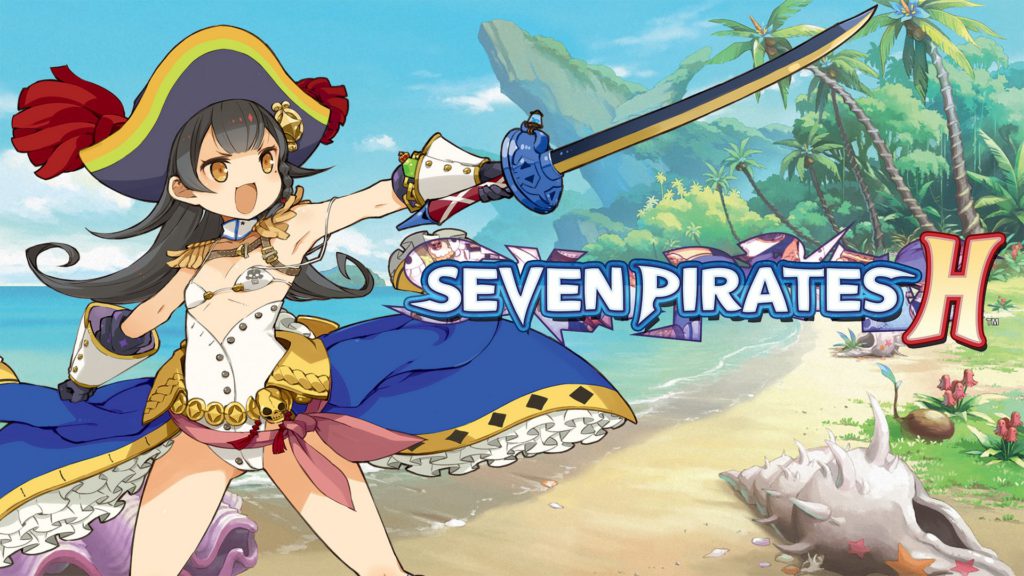 There are a group of fearless developers in the gaming industry, ones that aren’t afraid to push the boundary and release ecchi-inspired games. Felistella, known for multiple games of the fan service genre, has collaborated with publisher EastAsiaSoft to revive a PS Vita title for the Nintendo Switch. Seven Pirates H, is the fourth title in the Genkai Tokki series, one which sees you sailing the Monsupi Sea in search of friendship, treasure, and harnessing the art of Booby training.

I would think this goes without saying, yet I feel it’s worth mentioning that this is a mature-rated game, intended for an adult audience. In this single-player role play game, Parute’s adventure begins after washing ashore on an island in the middle of the Monsupi Sea.

With nothing to her name but a dream of collecting the seven hidden treasures and the company of her new companion, Otton. Having to fight her way out of the first area, with a skill set as modest as her chest, a new opportunity arises to, well, enhance, both at the same time. Otton, the magical otter creature, has a hidden talent that can convert ‘H extract’ from slayed monsters, and grow your hidden talents, stored in a pair of breasts. 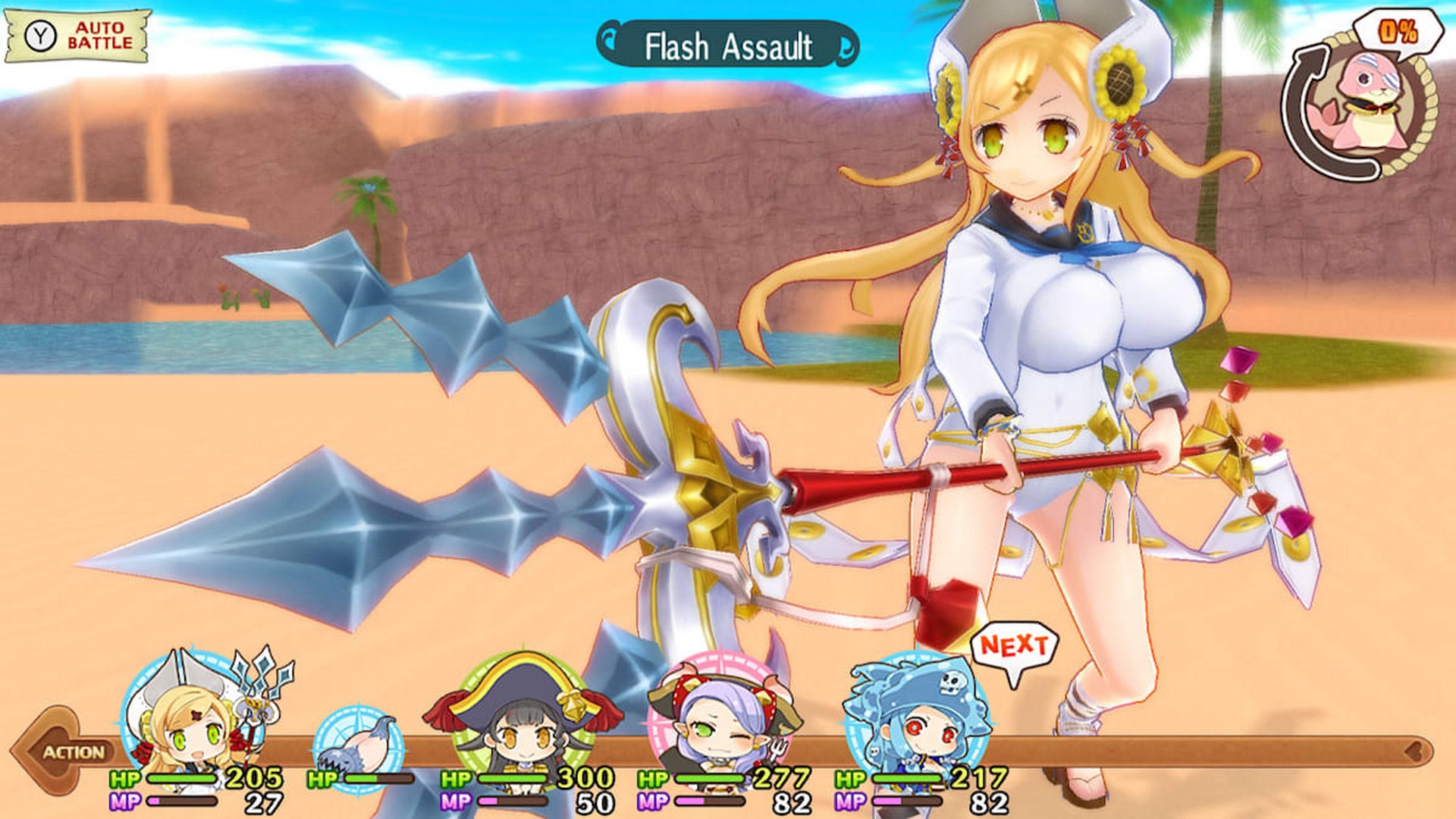 To get the full experience, the character models have been given a full 3D design that stands out against the still backdrops. For the most part, the background and setting, while varied, are purely for set design and won’t offer an outstanding amount of detail. That’s not to say they are not charming and well-drawn, even in the menus the anime art style designs are used to represent each character in the easy-to-navigate layout.

The scantily clad female characters, both hero and protagonist are all brightly coloured with outfits that resemble the monsters they are portraying. The enemies you can face, however, were all designed around some form of phallus or deviant in a comical and light-hearted fashion.

I feel like they understand that the intended audience will be well aware of what they signed up for, and dive into the fan service with due haste. In this turn-based RPG, you will build your stats per character to specialise in attack power, agility, health points, and defence. So what better way than to tie the abilities to the size and shape of the characters’ breasts, so you can watch the characters grow through your adventure. The term bigger isn’t always better, can certainly apply here as the bigger you get, the less agile you become, but the softer you are the more defensive capabilities can be had. Investing in your fighters was rewarding as you would gather side quests to unlock map pieces to progress the campaign or resources through defeating different types of enemies. 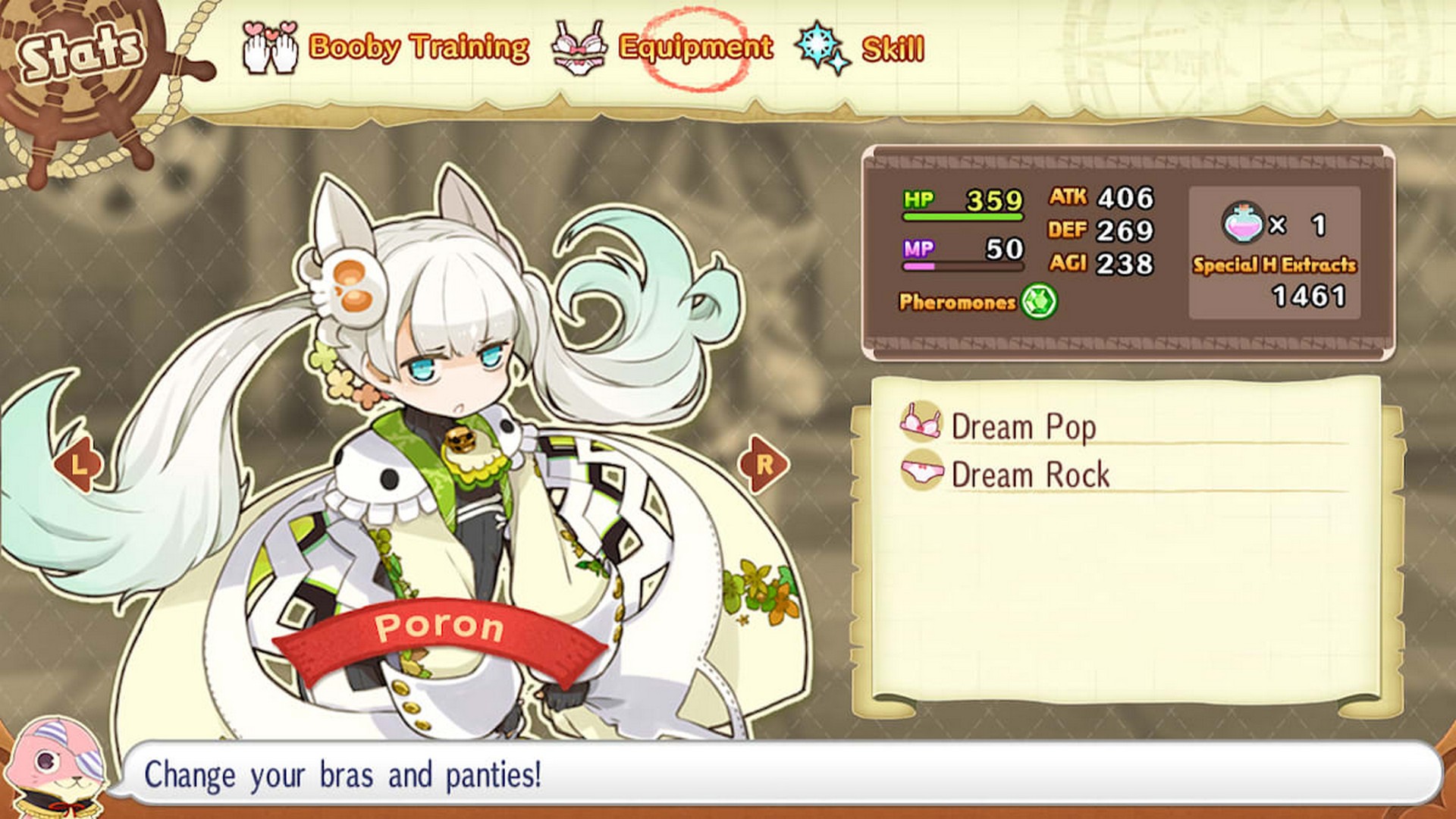 With the turn-based combat itself, you will slowly recruit different characters to build your four-party roster. There are three pheromones which are represented with Red, Green, and blue which is a way to add in an element system that has the strong against one and weak against the other functions. During combat, you can use a standard attack which lets you build MP to a maximum of 200 per fight, which is used to unleash stronger set-piece attacks or abilities to regain health, buff teammates, or weaken foes.

The gameplay loop itself was far from difficult, yet was engaging enough that during boss fights, the auto-battle toggle would likely get you killed and a legitimate sense of strategy was needed to succeed and gain H extract.

When you had enough extract you can enter a mini-game that the Nintendo Switch lets you get up close and personal. There are six different stats to invest in, all of which are tied to different massage movements. Each extract gives you ten “touch” points that let you flick, pinch, rub and fondle the breasts to increase the desired stat. You can rub in clockwise motions on the left and right of the screen beside the character or on the ‘target area’ to increase the size or tap the screen to increase the softness. If touching the screen feels too personal or you are playing in docked mode, the thumbsticks can mimic the same motions. 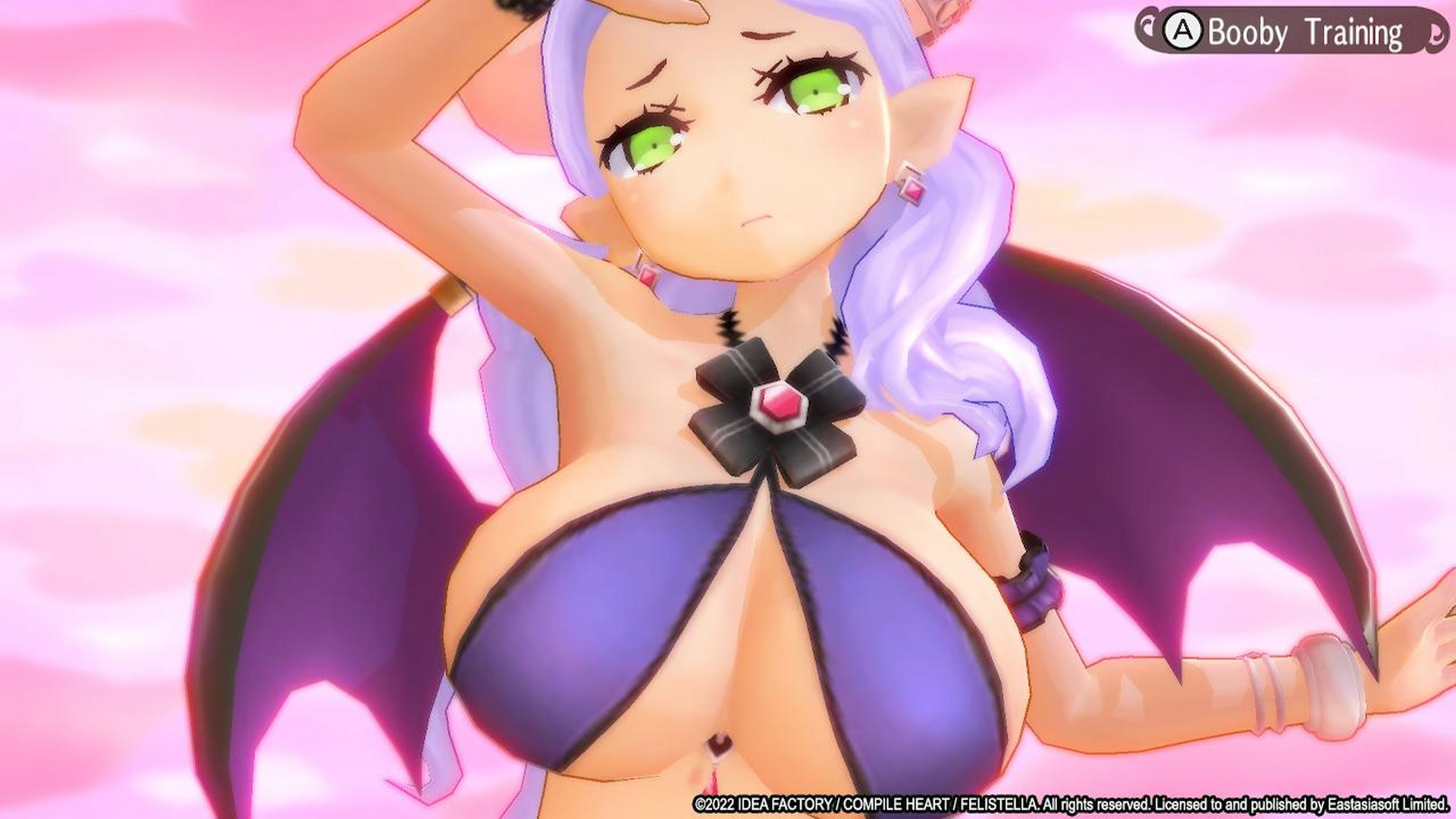 There was a practice mode as well so you could hone your massage abilities for as long as you want and the actions list was readily available if you needed a refresher. While in the Booby training section, you could also use your newfound assets to crush eggs you find on the way that house hidden items.

Since they had gone this far I would have assumed they would let your shake the controller or the Switch itself to jiggle away but that feature was absent. It was all a very comical affair and in an effort to encourage a ‘balanced’ build, if you invest stats to build a monstrous Z cup character, the chest area will transform into the most unnatural, gravity-defying presentation that resembled grape shaped balloons.

Seven Pirates H, gives the Nintendo Switch handheld mode a whole new meaning. I had plenty of laughs at the playful dialogue, actual moments of investment into the battle system, and a bit of fun head bopping to the arcade-style music. The gimmick ran its course rather quickly for me, however, I am pleased to say that there was a heart to the adventure and enough engagement to see me through the short but sweet pirate adventure. 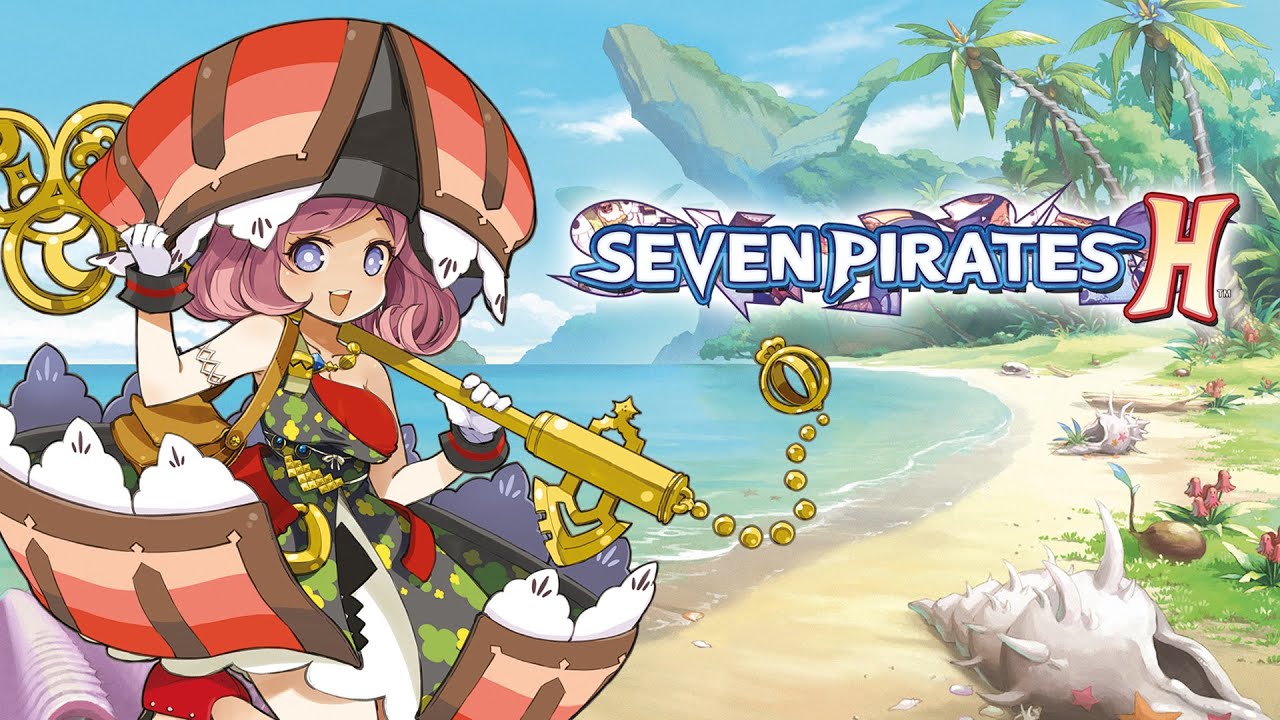 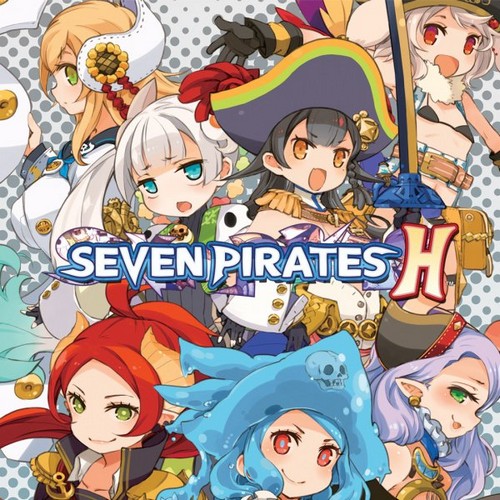 Join young pirate Parute Kairi and pervy boy monster Otton in an adventure to locate the lost treasures of the Monsupi Sea! Determined to make a legendary name for herself, Parute sets sail with a magic compass and the aid of newfound monster girl companions, but what starts as a raucous romp across uncharted islands gradually reveals something more sinister.