This little gem I’ve been toiling away with recently is from Sydney based Publisher, Blowfish Studios. When I was offered this to review, I was expecting an indie style game but what I got was a little under 2Gb of pure fun!

Space! The final frontier… Or is it? I have no idea, but thanks to Star Trek, any space themed game/series I watch or play has the voice of Picard, or sometimes Shatner playing in my head, if its feeling sassy anyway. When I got a chance to play Subdivision Infinity DX, I didn’t really go in with high expectations however, this changed as soon as I started the game and found myself in a cockpit. After using the analog sticks to have a quick look around, I press (A) to start my story as ‘Rebel-1’. The moment I pressed it, the dash of the shuttle lights up followed with some machine sound “beeps” and “boops”.

I’m the Captain now as auto pilot takes me out into space with the engines warming up to get ready to speed off at light speed. I feel like I should point out that you maybe shouldn’t play the start at night in a dark room… the light speed lit up my screen, my room and my retinas ha ha! With light speed done, I reach my destination and I could see the outside of my little green ship. Before I knew it, I was off on my first mission/tutorial. The play area was filled with asteroids, stars and space stations. I blitzed it thinking I’m going to smash through this whole 5 Area game… I was cockier than Han solo. Then came Mission 2 where I was blown up mere seconds in!

I mistakenly thought I could tackle the big-boy ship, not realizing there were smaller fighter shuttles coming in from the sides without me noticing. I blame the scenery. Blowfish Studios have made space, a cold dark location, into their own bright & shiny misty playground. Here you can explore space in exploration missions, setting out to collect precious resources to exchange for currency. You can also go searching for containers containing exclusive ship parts to upgrade your ships, or blueprints in order to build new ships which can also be found during and by completing missions.

Upgrading your ship is something I recommend doing whenever you have the opportunity. In my first boss fight, I was constantly destroyed. This was mainly due to the sheer size of it compared to my ship. Even with its higher shield & stronger weapons, my ship could take a few hits from it and survive until the beast flew into me… which may have inspired a few rage moments on my behalf. Here is where you get to spend all your currency and use the gear and blueprints you’ve collected through the missions. You can purchase new weapons or upgrade your existing ones. You can power through missions & farm experience to level up to unlock any of the 9 other ships or weapons. All of which have their advantages & disadvantages. I have personally been eyeing off the Avalon V that unlocks at level 8. I’m halfway there & then it will be mine!

The controls I found to be a little off putting at first however, after a few minutes finding my groove, it all worked well together. This is a polished little 2GB of beauty. Everything on screen just pops. The bright stars in the distance to the glare of the far away sun shining on my shuttle. The pop of bright lights surrounding the space shuttles scattered around asteroid or meteor belts. The firing of missiles and bullets are a thing of beauty to watch while hoping I fired before the enemy flew out the lock-on reticule. Even the home screen acts like a screensaver, Something I didn’t mind having play in the background while writing this review.

All in all I really enjoyed my time with Subdivision Infinity DX. I know it’s far from over as I want my dam Avalon V! And I will get it! “I’m givin’ it all shes’ got captain” to return and destroy the 1st boss. Sure, I could scale the difficulty down, but that wouldn’t make me a bad-ass space fighter star trekking across the universe. I haven’t come across anything that negative or I didn’t enjoy except for the lack of co-op or online play. But in saying that, I’m all for Single player experiences. The market needs more of it in my opinion, and on that note I’m signing off until next time. Peace.. 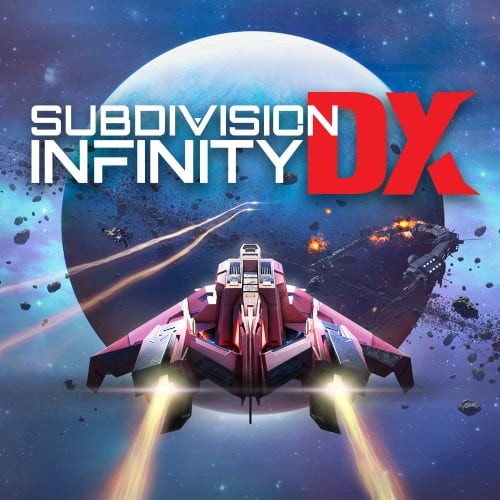