By StacefaceMayhem on December 5, 2017 on Reviews, 4 More
close [x]
Tweet
No Comments

Mario is the icon of gaming. There is no debating this. Ask anyone to name a famous gaming character and hands down most people without blinking would say MARIO. Starring in over 200 titles, he is cherished by the young and old in the gaming community, and we are very vocal if a game adds to his legacy or brings shame to his family.

Super Mario Odyssey is a 3D platformer, developed for the Nintendo Switch. Being part of the famous franchise, that had me hooked on N64 back in the day (I know, I was a late bloomer), and starting all the way back as ‘Jumpman’ in the arcade world in 1981, fans have high expectations of a character who has come a long way and stood the test of time.

This story introduces you to Cappy, a cute as hell ghostie entity with a major obsession with hats, who also has some major beef with Bowser. Bowser is up to his usual antics, this time going on an abduction spree by taking Princess Peach and planning an extravagant wedding (just a tad creepy a monster is so infatuation with a humanish girl) and also Cappy’s sister Tiara. Not happy with this two for one deal, Cappy possesses Mario’s iconic hat, giving him new abilities as they pair up for this typical search and rescue mission, the franchise is famous for. I couldn’t help feel excited as I booted up my Switch to throw down with this golden oldie. You notice straight away the game looks so fresh, crisp and alive. These brightly coloured sandbox worlds, are oozing with detail to the point I felt over stimulated, and I absolutely loved it. Every scene or interaction runs a competent 60 FPS whether it be docked or in handheld mode. While it essentially doesn’t have any touch screen elements, and runs smooth as hell with a controller, I preferred handheld as I liked to play whenever I had the chance.

Super Mario Odyssey plays just like its Nintendo 64 counterpart, rolling, throwing down, jumping and spinning through the air to collect ‘Power Moons’, however this time the hat mechanic has been initiatively improved and it is geniusly executed. Now due to Cappy’s ability, Mario can throw his hat and teleport into other character, influencing them and using their own unique skills to solve problems. Have a big boulder in the way? Control the dinosaur sleeping blissfully to destroy it. Can’t reach that platform far away? Transform into a centipede and slink your way across, it is that easy. This game mechanic is innovatively brilliant and keeps the gameplay fresh and ever evolving as there is so many options to approach collecting the different moons, spread so vastly around the open worlds.

All levels accumulate with a boss battle at the end, and while these are not particular long or difficult, each is unique, requiring certain move sets and are cinematic and memorable. When I mentioned open, I meant it, these levels are huge and so multifaceted for a platformer. There are so many nooks and crannies to explore. Most is platforming, but there is plenty of chances where the game switches it up. You may need to find a item, use a character as I mentioned before, or my favourite hit it old school. It was glorious to see the illustrious green tunnels, enter them and see Mario turn into his original 8-bit self, as you tranverse stages in 2D, modern elements are introduced such as 8 bitting round corners or gravity changing. Another showcase of how hard developers have worked to make this game a truly inventive experience.

Like all modern games, Super Mario Odyssey is not without customisation. Now you can buy souvenirs, hats and ‘cosplay’ for our little friend. Each level has a store, where in game coins, and rarer purple legion specific coins can be used. No micro-transactions and cute as hell dress ups with Mario are a win in my books. Another surprising thing about this game is once the story is over, which despite being quite short feels like an epic quest, the game keeps rewarding. With hundreds of moons to collect, new areas being revealed and more costumes to collect, I found myself playing for hours even after completion, without even batting an eyelid that it was in all the same levels.

I literally wanted to play this game from start to finish once I got it, the whole time squealing anything cool or cute happened, dragging anyone who would listen over to see. I think that is what some games are missing now days, the joy factor, just a carefree good time. This Mario is a well-executed, joyful game and definitely one of the favourite games I have reviewed this year. 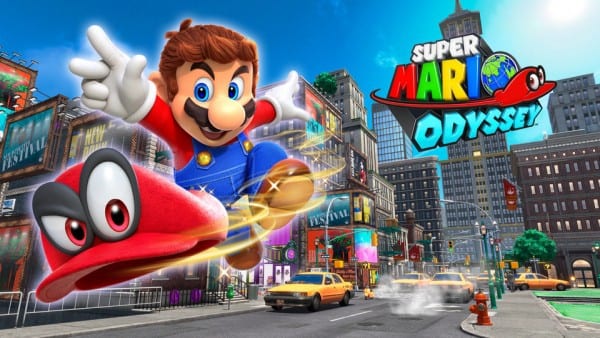 New Evolution of Mario Sandbox-Style Gameplay. Mario embarks on a new journey through unknown worlds, running and jumping through huge 3D worlds in the first sandbox-style Mario game since Super Mario 64 and Super Mario Sunshine. Set sail between expansive worlds aboard an airship, and perform all-new actions, such as throwing Mario's cap.