It’s always exciting when the boss asks you to review a game but doesn’t tell you what it is. Is it a shooter? Is it something that flew under the radar from one of the big developers?

I got the question through messenger asking if I could review a game for the PS4 and jumped at the chance. The last time things happened this way, I was given a copy of Anthem to play with Stace and offer my input for her review.

With the download codes in hand, I raced home from my nine to five and eagerly turned on the PlayStation. An update… Damnit. That’s ok. It won’t take long.The system did its thing and I hurriedly switched over to the store and punched in the codes. Developed and published by Nippon Ichi Software, from here on to be called NIS, The Princess Guide is a Strategic Role Playing Game that puts players in control of a retired Knight who must train 4 unique Princesses. After a brief tutorial, players will be able to create their own character with a selection of personalities and voices.

You’ll then be given the choice of one of the four Princesses, each with their own differing playstyles. From here, you’ll embark on missions and training events, all the while praising or scolding your student as you see fit.

Moving away from a Diablo-esque gaming style, you’re then shown a map that spider webs between various towns, cities and outposts before being given your first actual mission. This is where the strategy side of things comes in as you’ll need to find the balance between sending your squads out on missions and giving them time to relax and recuperate. While you’re deciding where to go next, you’ll have the chance to open a very simple levelling system. Different items will effect one of 5 attributes. This in turn will allow you to unlock “Materia” (Sound familiar?) and grant some new abilities to your selected Princess. Riveting stuff…

While the art style the game uses is well executed, The Princess Guide is quite a flat game graphically. The easiest way I can describe the game is a mix of Castle Crasher and Pokémon. 2D Models move around the play map, while your weapon slashes out when you mash the buttons to attack. Cut scenes on the other hand often feature a still accompanied by a bouncing anime Princess with very minimal expression.

That being said, the voice acting is everything you’ve come to expect from an over-the-top anime series, but unless you can understand Japanese, you’ll spend more time reading the subtitles than appreciating how well this has been executed. Next,then perform a complete one hundred and eighty degree turn and experience some of the most overused arcade like sounds and music I have ever heard, particularly after a rather exciting, if entirely unsuited soundtrack supported trailer for the game. While The Princess Guide provided some distraction from my normal shenanigans, I don’t see it as a game that sports any real replayability. A generic story line is just there for the sake of having one, while the gameplay itself doesn’t really offer a challenge; basically mash on your controller while the game spawns simple enemies before something slightly more difficult.

Sure, I had a little chuckle about being able to make a character that was an “Eccentric Pervert,” but this didn’t appear to add anything to the game. While it may hold some ground with people more heavily influenced by anime, I can safely say for the bulk of gamers, this will be one that is left on the shelves. 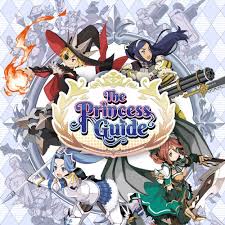 In a land torn by chaos and war, a new evil rises. Now, four princesses from four different kingdoms must learn how to lead their people to victory. Commence the Princess Knight training regimen! As an experienced knight, you will choose a princess to become your apprentice.