In the early 2000’s my PC was under heavy strain from two particular games, ‘Diablo 2’ and ‘Total Annihilation’. I like to imagine that one night, 20 years ago, those two snuck away and made a baby that has grown up to become “The Riftbreaker” and is finally ready to venture out on their own. The hard-working individuals from Exor Studios have been toiling away in Szczecin, Poland to deliver a stunning real-time-strategy/action RPG/ survival hybrid for both console and PC. This review will be focusing on my experiences playing on the Xbox Series X and using a controller.

Set on the edge of our very own Milky Way, Captain Ashley S. Nowak must brave the terrors of Galatea 37 in an attempt to build a portal back to Earth for future colonisation. Accompanying our Captain is a handy little mech suit aptly nicknamed “Mr. Riggs” by Ashley herself. This jack of all trades, A.I system built into the suit will correspond back and forth with you through your tasks, and is the only comfort you will get this far from home. I genuinely enjoyed the back and forth banter between the two, it helped cover some gameplay and story exposition and added a layer of comfort when I felt alone.

His primary function is to assist with building up the various structures needed to farm, process, and extract valuable resources. His combat-ready frame, however, can be fitted out with some truly devastating weapons to help survive the brutal fauna life that grows increasingly hostile from your intrusion. It was a continuously evolving experience that was never short of stress-inducing and heart-pounding moments that drove home the desperation of establishing the portal back to Earth. 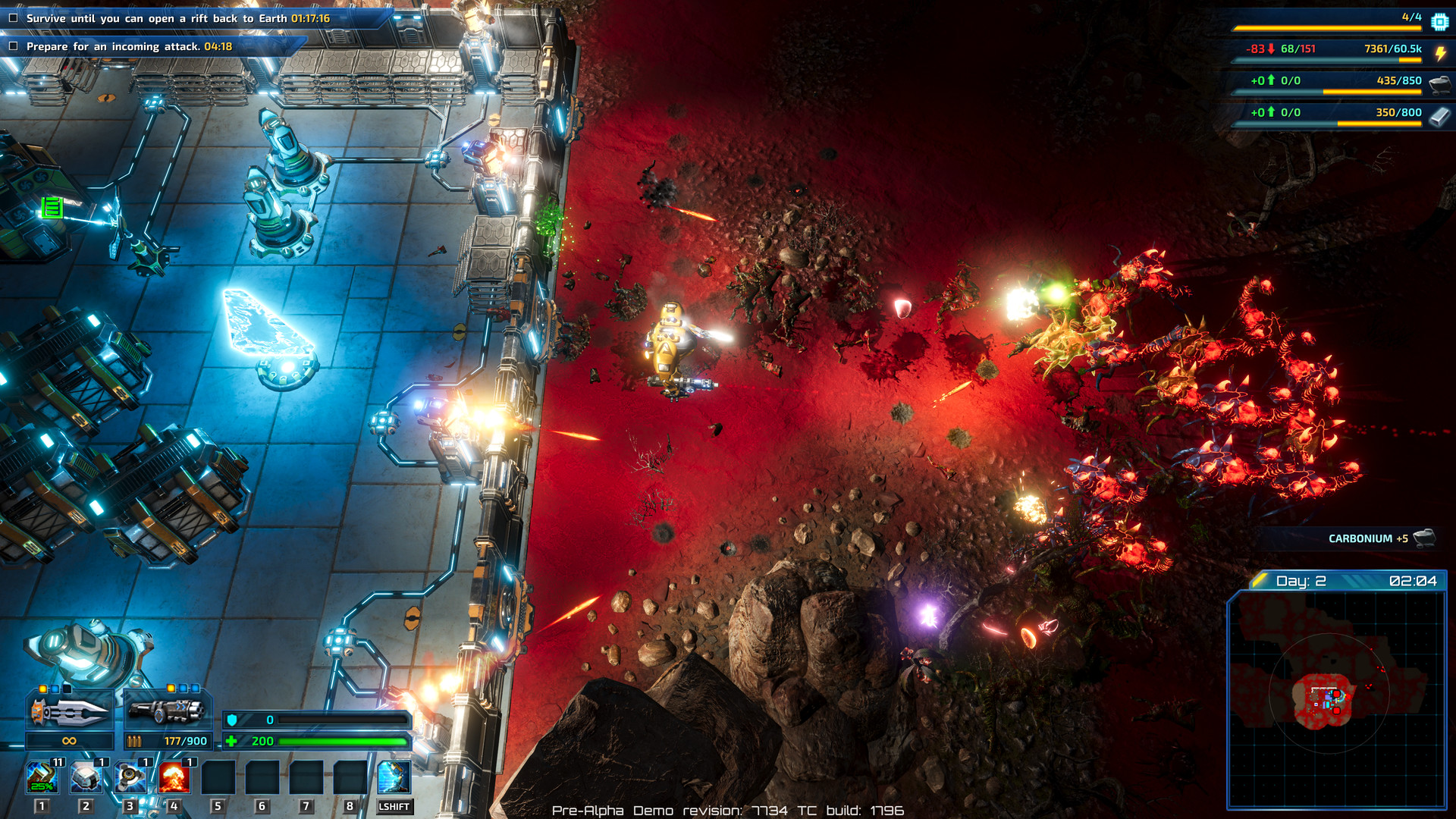 The foundation of the game is centered around terraforming the landscape into a well-oiled base of operations. Initially starting in a familiar, yet foreign jungle environment, I was quickly wrapped up in collecting carbonium to establish my headquarters. If I were to take too much damage out in the field I would be sent back here to regather myself and start any required repairs. Gentle reminders prompted options to source energy, carbonium, and also options to build a perimeter and defences.

There is a little bit of trial and error but each build option has plenty of information on display to properly plan out the most optimal methods. The more you explore and scan environments, the further you can develop and research your facilities. This in turn means you can build the highest level available for each unit when your branch out instead of starting from scratch and upgrading.

For example, once you have experimented with the basics, and eventually move on to the outer regions of the planet, there are huge implications introduced with the radically different environments. Finding the ash-covered areas affected by active volcanoes is an excellent area to mine but would be a waste to build solar panels due to the sky being blocked out. The other issue that will become more prevalent is the dynamic weather systems that are unique to each environment. Giant volcanic rock can spew forth and crush your carefully crafted factories and mines and if that wasn’t enough cause for concern the acid rain in the swampy plains can corrode entire sections of your base. 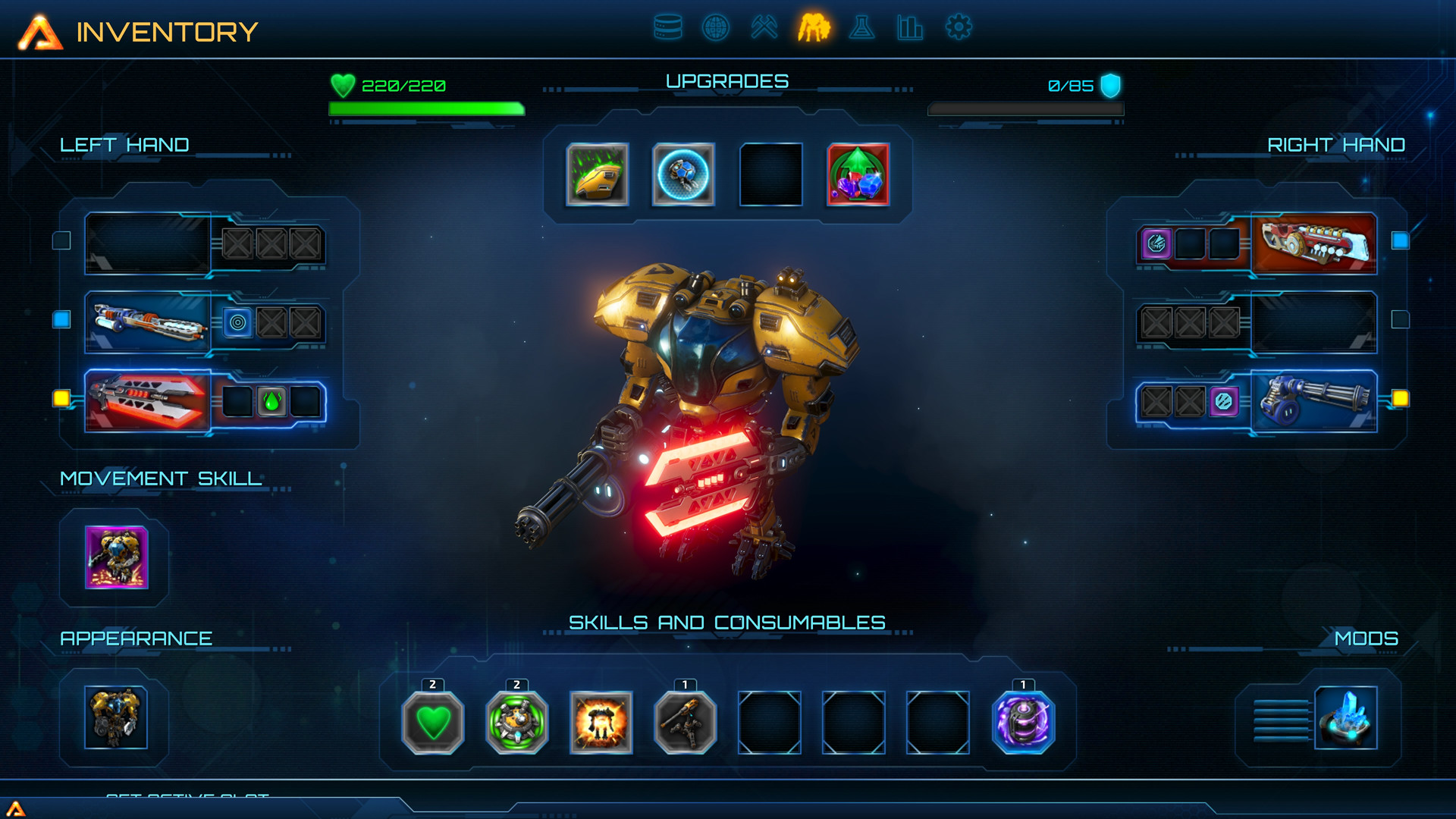 While completely functional on a controller, building, and upgrading can become time-consuming. A helpful and satisfying UI does make placement easy to manage when planning but with the ever-present dangers from both wildlife and the weather, you may draw a nervous sweat managing your multiple bases while running for your life. That is where the action portion of the game comes into play and you get to flex your combat prowess. Here the game opens up into a twin-stick shooter with up to three weapons attachments per arm.

Hordes of volatile creatures will flood your screen periodically and through a combination of flamethrowers, rockets, shotguns, mines, and more, you will never be short of options to take the fight to them. Ranging from tiny reptile creatures to cumbersome yet ferocious and hulking rock monsters, each one was tailored to their environments and posed a significant threat if left unchecked. Churning groups into a bloody pulp were deeply satisfying and balanced out the more tedious parts of base management. Furthermore, you can invest in research options to kit out your walking tank of a mech suit to add some powerful movement and crowd control abilities, effectively making you a one-person army.

Depending on your experience and optimisation of your exploration and expansion, you can reach your end goal in under 20 hours. I would say the mass majority will be digging away at Galatea 37 for quite some time before sniffing the end game. There is a survival mode but it is largely just the same experience as the campaign with a few extra options to play with. The balancing act between building, exploration, combat, and self-improvements were such a seamless experience it is hard to not look at this as the new standard of survival RTS games. I am also happy to be able to look forward to the future additions of co-op which could make the survival mode a hell of a lot more interesting. The Riftbreaker is a base-building, survival game with Action-RPG elements. You are an elite scientist/commando inside an advanced Mecha-Suit capable of dimensional rift travel.