Cats are interesting animals. For the most part, they are graceful and elegant, constantly curious of the world around them. Other times they can be extremely lazy and hilariously clumsy. One thing all cats have in common however, is the air of superiority they maintain, believing they are above everything else and you should bow to their needs. In some cultures they were held in high regard, as people considered them able to ward off evil spirits. Other cultures associated them with witches, and black cats in particular are considered bad luck. This is where Yew comes in, with Unfamiliar being released on the 13th of December, you’ll take control of a magical black cat.

Unfamiliar, developed and published by Mana Tea Games, isn’t what you’d expect from a game in general. It plays kind of like a side scroller set in a somewhat three dimensional world. For all intents and purposes, the player will be able to choose what direction Yew wanders off in, but is heavily dependent on a rail like system where Yew will follow a specific path. Through your travels, you’ll come across items you can interact with, subtly marked by a cats paw print hovering above it. This could be something that will unlock a different pathway for you to explore, or it could be a material you’ll need to craft new outfits.

There are no enemies for you to overcome, and you’ll find that there aren’t really any puzzles to complete either. Your goal is purely to explore the beautifully crafted worlds seeking out materials to create new items to wear or decorate your tree house with. Players can set their own goals and take as long as they’d like to achieve them, as Unfamiliar doesn’t really have any form of story line, nor does it penalize players for taking too long to complete objective – there aren’t any. As much as Steam suggests you can “unlock hidden rooms” as you complete quests, I found I had all four rooms unlocked within the first two worlds and spent the remainder of my time gathering materials in the hope of crafting the cute little bat wings. 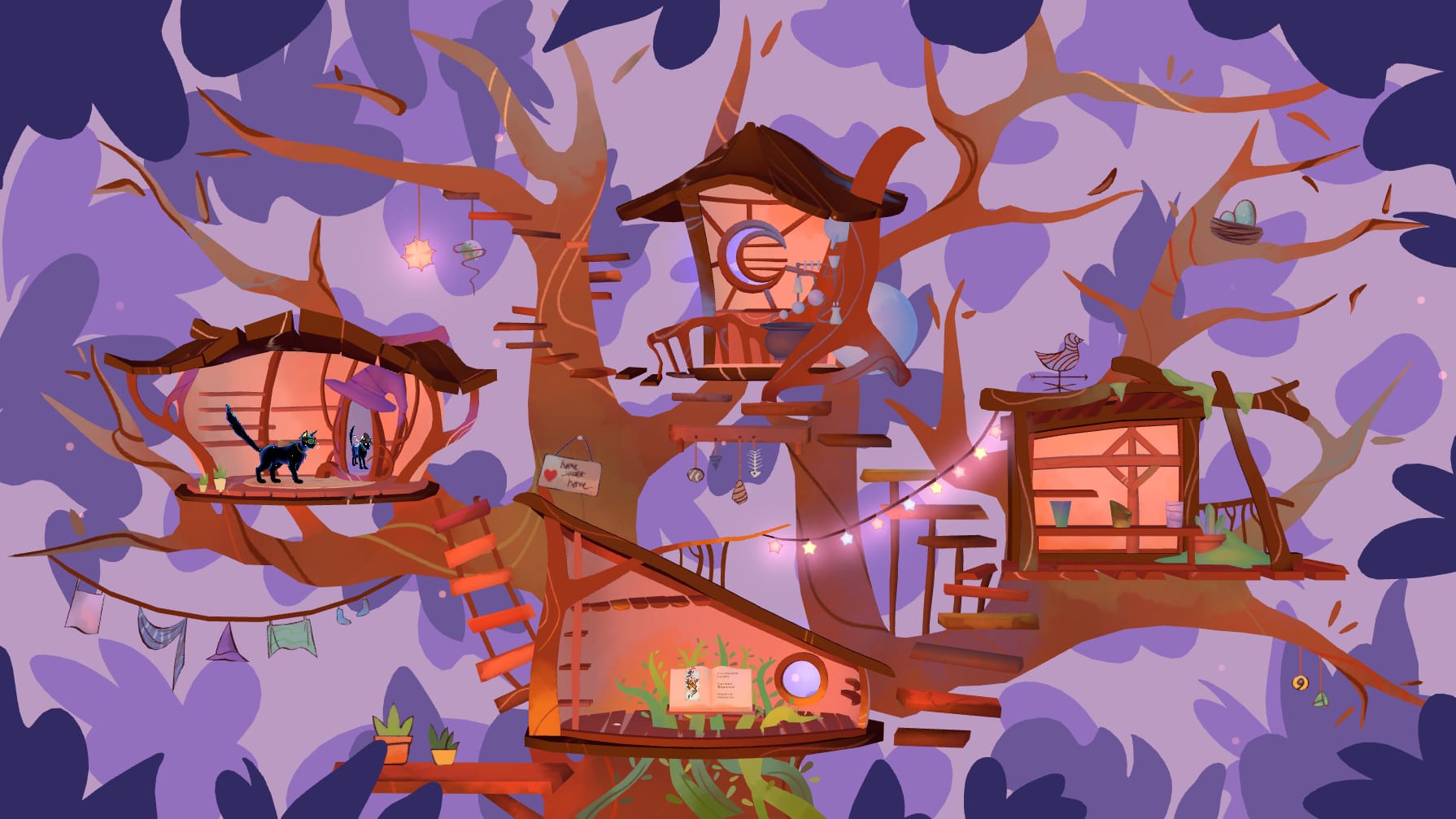 While the worlds are beautiful, they are very simple in design. A flat colour makes up the majority of the background, with a few stylised geometric shapes adding colour and detail to the world. Yew on the other hand, has a little more attention lavished on her, with a proper 3D model representation. She is still kind of basic compared to what some people might be expecting in this day and age, but the difference between Yew and the world around her really draws your attention and makes you focus almost exclusively on the little black kitty prancing around your screen. The tree house that Yew lives in has been treated with a little more detail than the standard play worlds, but still looks as though it may have been thrown together in an afternoon by someone using MS Paint. Don’t get me wrong. I could never create something with this level of detail, but there are certainly some amazing things I have seen created on such a simple program.

Controlling Yew is very simple. Click the mouse which direction you want her to travel. Done.
If you’re as lazy as I am, just click and hold the mouse, and she’ll run that way until the track runs out or changes direction. If you stumble upon something you can interact with, click it with your mouse and Yew will throw it in her spell book. This is where I ran into my first issue. On occasion, there will be a material to collect in the middle of an intersection or just away from a pathway. Clicking on the item would have Yew walk towards it, but fail to collect it. This lead to some furious button clicking, which caused my second issue. Too many clicks in an area would have Yew start melting into the ground or her walking animation to glitch out and have her walk vertically instead of horizontally. Not the cute kind where animals sometimes walk on their hind legs, but the kind that makes you think “Oh crap… I broke the game.” In some circumstances, I had. Yew would somehow get off the rail movement system and be stuck in one spot, flicking from side to side so fast the refresh rate on my monitor displayed a two headed, two tailed cat all at once. 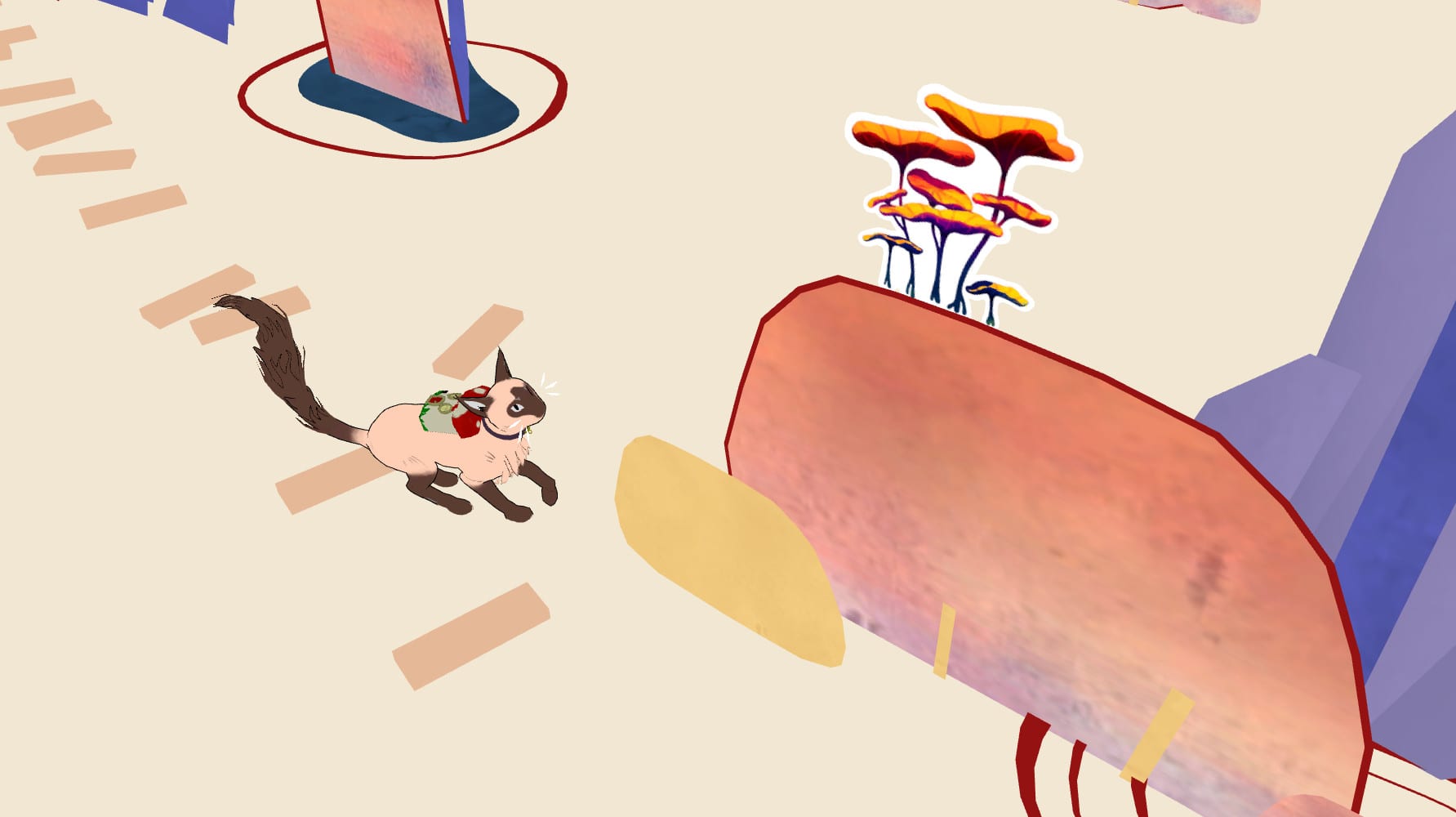 The saving grace for Unfamiliar was it’s music. Each world has its own theme, and from what I experienced, it’s all very relaxed and calming music. Yew will make all the normal sounds a cat makes, like the little noise that sneaks out when they land on a surface, or purring loudly as you collect more materials in short order, but the music was the winning factor. Beautifully written scores had me feeling a calmness I haven’t felt in a while, and while the gameplay was mind numbingly boring, I kept playing, all due to how relaxed I was feeling.

Unfamiliar isn’t a game for everyone. Unless you set yourself a task, it lacks direction. If you want a game that challenges you, this has nothing. No action. No quests. No thinking. On paper, the game has absolutely no appeal. Having tried it, I can safely say I will probably keep playing it. You might be asking why, and I honestly wouldn’t blame you.

What Unfamiliar does, is help to relax you. Help reduce your stress levels. Helps to calm you down. Unfamiliar isn’t really a game. For all it’s simplicity, Unfamiliar is a tool. A tool that helps you escape the stresses of modern living and takes you back to a time where things are simpler and all your worries just melt away. Don’t buy Unfamiliar as a game to be played. Invest in something that will genuinely alleviate your stress. 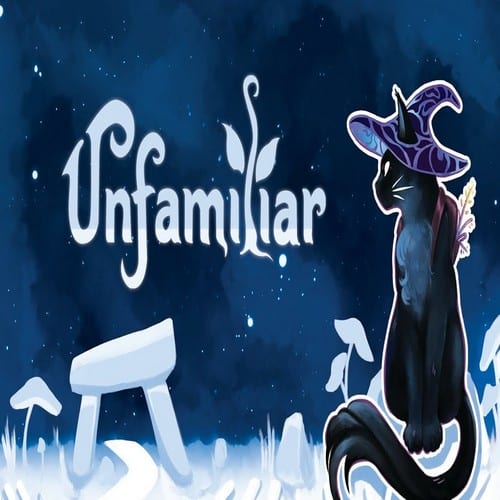 A relaxing fantasy adventure game where you play as Yew, the witch-cat who sets out to acquire magic ingredients from storybook worlds to craft items and create enchanting costumes.