Unruly Heroes follows four unlikely characters on their journey to the west in this side scrolling action adventure. If you didn’t already know, this game follows monkey and his three companions in a story that is inspired by the Chinese legend ‘A journey to the west’ better known as the Monkey King Legend.

The sacred scroll that maintained the balance and harmony of the world has been torn and scattered across the lands and now creatures are causing chaos through out and it is your mission to fix what has been done by defeating your enemies and collecting the scrolls.

Unruly Heroes Features Wukong, Sanzang, Kihong & Sandmonk. You can play as one of these four characters through the story and rotate between them to use their abilities. The abilities appear different at first, but after a while, play the exact same.

Each character features swift agile movements that deal equal strengths & no character really ever feels independently unique. They are easy to handle and maintain when jumping from platform to platform, collecting coins and fighting. It’s very quick to pick up and play and the controls are responsive to the gameplay. Player Vs Player is your battle arena. Here you can either choose to play local or online with Friends or the CPU. You choose to play as one of the four unruly characters either in a team or free for all, which feels much like a “super-smash-esq” mini game.

Something that stood out to me in Uruly Heroes was the attention to detail with both the audio and visual. They are both outstanding! It’s not the basic or standard type of adventure game background noise you’d expect from most platformers, everything has its own unique sound such as the wind flowing by, objects blowing in the breeze and small footsteps crunching along the earth and structures under your feet.

This sort of attention to detail with the audio really adds to the atmosphere of the game and add on top the that the beautiful art style, and you have something that pulls you in to the game. Unruly Heroes almost reminds me of traditional Chinese artworks but with a modern twist that adds to the overall feel of this game. 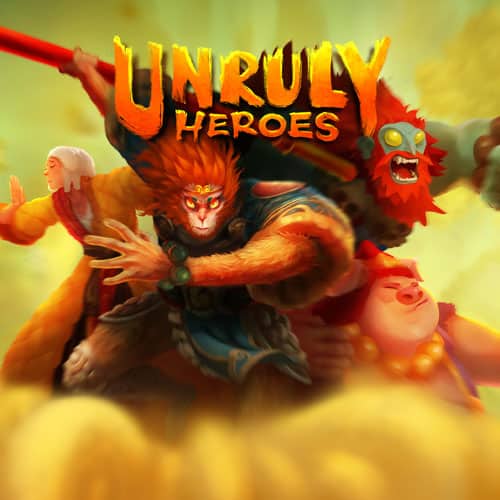 Unruly Heroes is an action-adventure game inspired by the famous chinese legend ‘A journey to the west’ better known as the Monkey King Legend. Through this epic adventure, the game will make you live a fantastic and unforgettable experience. The game can be played in coop up to 4 players, but you can decide to play online in fierce Player vs Player modes. Who will be your favorite character?