I’ve been playing Warhammer 40,000 since I was 15. I have a significant number of little plastic men and an assortment of vehicles to boot. One of the coolest models I have in my collection is a Space Marine Tech-Priest, a loyal servant of the Machine God charged with maintaining the armour, weapons and vehicles of the 41st millennium. Finally released as a playable army a couple of years ago, the Adeptus Mechanicus saw the release of beautifully designed models adorned with cybernetic alterations and flowing robes.

Warhammer 40,000: Mechanicus plays almost entirely like Mordheim: City of the Damned, in that players will take turns moving their units and spending points to open fire or swing powerful melee weapons. Throughout missions, players will unlock new equipment which can be used on personalising up to six Magos, as well as a number of support auxiliary including Skitarii and Sicarian Ruststalkers. You’ll also be able to upgrade your Magos by using Blackstone gathered in missions, unlocking Disciplines that will make them more efficient at one thing or another.

Developed by Bulwark Studios, Warhammer 40,000: Mechanicus takes place on the fringe planet Silva Tenebris. After discovering a vox transmission lost in the warp, Magos Dominus Faustinius launches a team to the planet’s surface, eager to uncover lost human technologies and determined to discover the reason for his comrade’s disappearance. Little do they know, the energy signatures they detected were the ancient Necrons, slowly awakening from their eon’s long slumber, and the presence of the investigating team has only hastened the reanimation protocols. Surrounded by a slowly increasing number of robotic enemies that wield crackling gauss weapons, the Magos and his team fight for their lives as they seek out lost technologies, research the Necron threat, and above all, put a stop to their awakening. 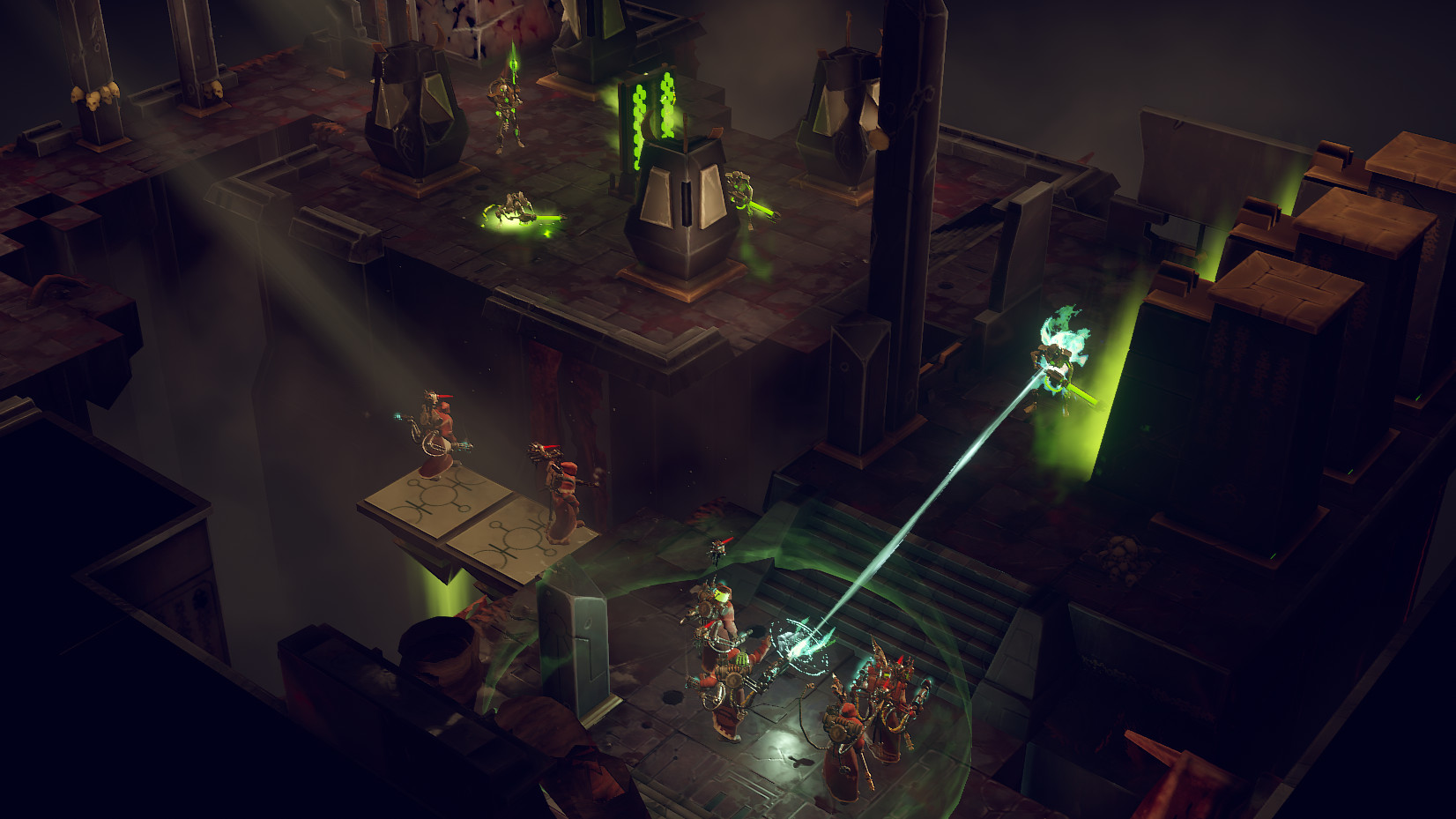 Missions will initially start out with a hologram displaying the current mission surroundings. The squad will move from room to room, occasionally given a choice on how to proceed with certain things that activate within the room they move into. These choices can directly affect how the game pans out further down the track, and while the bonus you gain from spending time researching Xenos technology may be initially fruitful, it could result in a higher number of more powerful enemies in an upcoming battle.

When it does come time to exchange fire, battles play out like almost any other turn based strategy game you can think of. Players will move their pieces and use Cognition to open fire or swing a giant axe. Unlike other games however, Cognition isn’t automatically gained at the start of your turn. Players will need to move units into range of Necron technology, forcing you to split your team up and be more tactical in your decision making.

Given the title was originally released on Steam back in 2018, Mechanicus is a little lacking in the graphics department. While we get a very grimdark vibe from the whole setting, character models are somewhat flat in detail. The proud red robes worn by the Tech-Priests have very minimal detail to them, with pipes and mechanical tendrils simply clipping through them. Regardless of the outdated graphics, you can easily tell who has what weapon, as well as visually tell the difference between the opponents. 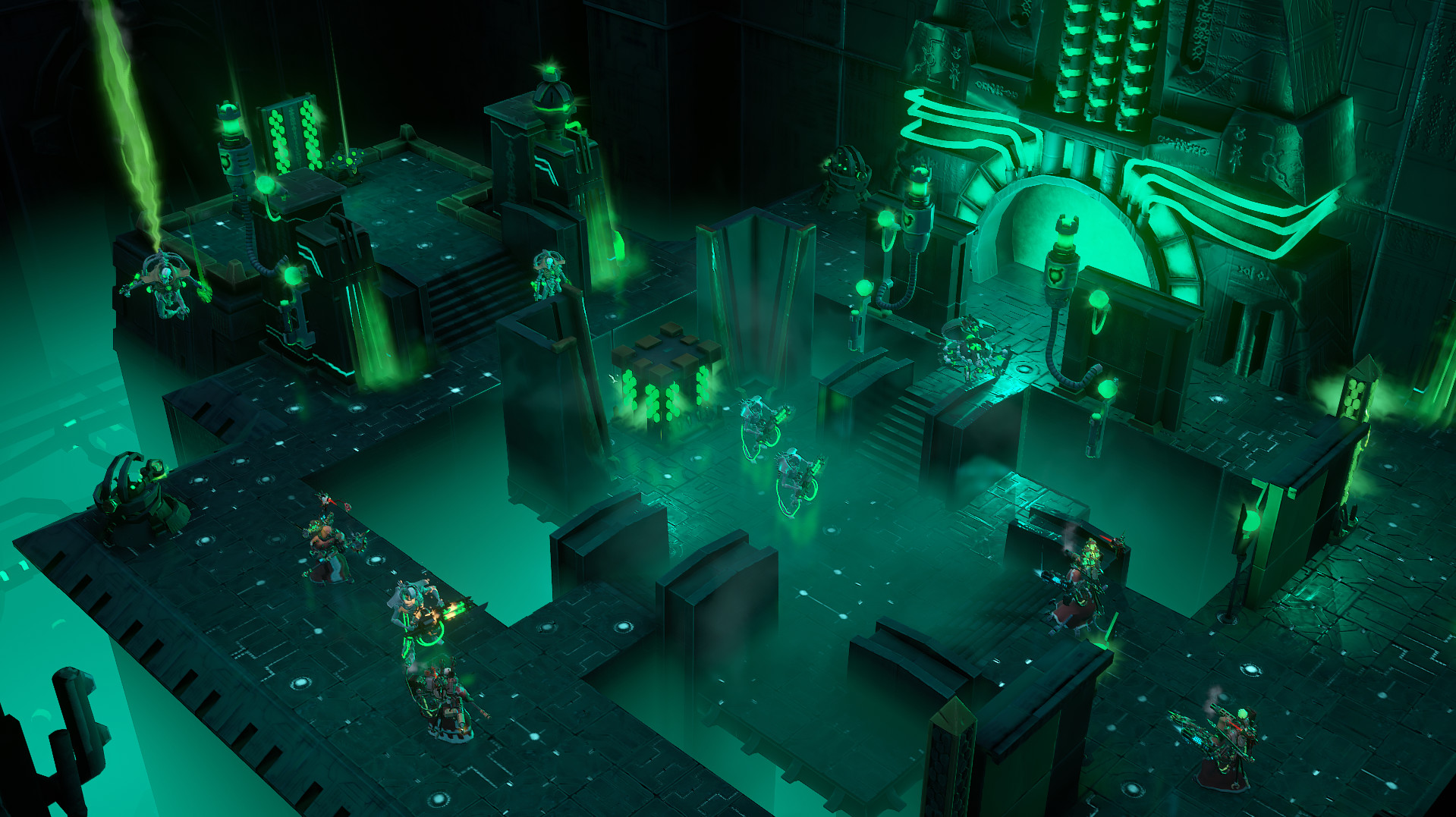 Warhammer 40,000: Mechanicus is filled with disturbingly dark music, entirely composed by Guillaume David. The tones used, as well as the limited vocals lends itself well to the 41st millennium and provides a beautiful background for your game. Being the playable race is made up entirely of cybernetically enhanced humans and their mind scrubbed servitor counterparts, there is little in the way of voice acting, with speech instead being represented by what I can only describe as static, though in the Warhammer 40,000 lore, this is known to be binary. The Necrons on the other hand have some limited dialogue, with more powerful characters actually having a voice. Heavily modified, these voices are very monotonous and are perfectly suited to the role.

While I’m not a huge fan of turn based strategy, I found myself wanting to play more and more, just to see how much I could unlock. Yes, gameplay can be a little on the slower side, given you have to make sure you earn enough Cognition to achieve your immediate goals, but it’s still a whole lot of fun.

Players will need to develop a strategy and position their troops in ways to ensure they are getting the most out of their units, or you’ll fail even the simplest of missions. Gameplay is the biggest saviour of Mechanicus, and regardless of how outdated the graphics might be, you still feel like you’re commanding a small and elite squad in the grimdark 41st millennium. 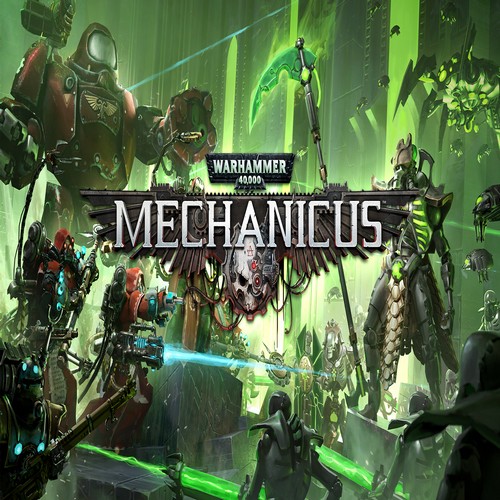 Take control of the most technologically advanced army in the Imperium - The Adeptus Mechanicus. Your every decision will weigh heavily on the outcome of the mission, in this turn-based tactical game. Will you be blessed by the Omnissiah?