This is a very different RPG, when compared to others in the genre, this isn’t set in a fantasy world, nor in a post apocalyptic world, this my friends is in the modern world, hence the title of the game.

Yiik: A Postmodern RPG is a single player game playable on the Nintendo Switch,PS4, Windows and PSVITA. Set in the 90’s, taking place in a small town, that at first feels like a normal place but once you explore it the weirdness shows itself. You control a guy named Alex, he witnessed something strange that entails a long journey to possibly uncovering the strangeness that is going on around him.

The best part of playing this on my Switch was the fact I can play it at home or while I’m out. I played both docked and in handheld mode and the game ran near perfect no matter which way I played. Now, I was a tad bit confused when starting the game for the first time as I wanted to play in handheld mode, the game asked me to remove the joycons to do so, I though really? And immediately went to play in docked mode. After playing for a bit I decided to see if I could in fact play in handheld mode and to my joy it allowed me to. The pro controller is also compatible with this title which is great. As this is a RPG you’ll pick your name, your sex and you’ll than be asked some questions based on your real life, then you’ll be thrusted into the game.

Most of your time is spent walking around the many strange areas of the game and interact with NPC’s and find money and other nifty items. When speaking to NPC’s they hardly ever talk, instead those conversations will pop on screen for you to read, though Alex does talk for the most part. You can’t have an RPG without some form of combat and Yiik has its own twist on that. You’ll fight against rats, giant smiley faces and many other things that look odd. You’ll attack and defend or run away if you can’t hack it in battle. When attacking or defending you’ll need good timing to execute either actions to do a large number of attacks or to dodge an attack and not take any damage. If you lose your health it’s game over, but don’t worry too much because if you choose to continue you’ll pick up where you left off with full health again. Scattered around are health stations for you to regain any lost health, and saving is just a matter of spotting public pay phones or phones inside houses. Controls on the Switch are downright simple. If you want to interact with any NPC’s or other items it’s done so with the A button, your left stick is for movement and if you press the + button it’ll bring up the games menu where you can check stats, skills and config sound options.

My first thoughts upon starting up the game was it was super colourful and cartoony. It also includes some real life pictures, one example of this are pictures that hang on walls, it kind of made me think of South Park, but without the over adult humour. Seeing as the game takes place in 1999, the retro appearance suited the strange things you come across in the game. This isn’t a game that demands much performance wise either, so even on the Switch it played nice. One thing that seemed odd was the random camera angle changes, it wasn’t a constant occurrence but happened from time to time. There isn’t a HUD, only when you are battling and even that’s the bare minimum.

Yiik: A Postmodern RPG is a outlandish retro RPG filled with strange places and characters, with Alex being the only normal factor to the game for the most part. It was great to experience a game of this stature without being thrown into your average RPG. 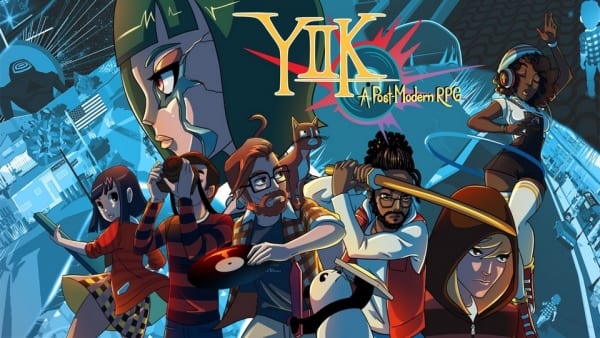 On the afternoon of April 4th 1999 Sammy Pak went missing. That night, a video of her last known moments was uploaded online. All of your friends excitedly watched as she is pulled from an elevator by something.