Forgive Me Father is a new dark retro first-person shooter game set in a comic-book-style world inspired by the novels of H.P Lovecraft. Developed by Byte Barrel and Published by 1C Entertainment, Forgive Me Father will deliver a good throwback to the older generation of shooters like DOOM and Quake.

Starting off, you will first pick up a revolver and start killing the zombie-like beings in your way. There is a story to the game, which you can choose to be invested in it, or you speedrun past it, depending on the playstyle you are going for.

Story content is displayed on the screen as a pickup and it is done like this so it is impossible to miss, as certain items that give further lore can be a poster on a wall to a half-burnt piece of paper randomly on the floor. As you progress and kill things you will gain madness. Despite the name, madness is actually a good thing as it will improve how much damage you deal and lessen how much you take. Also, gaining madness further into the game will recharge the ability items you will find. 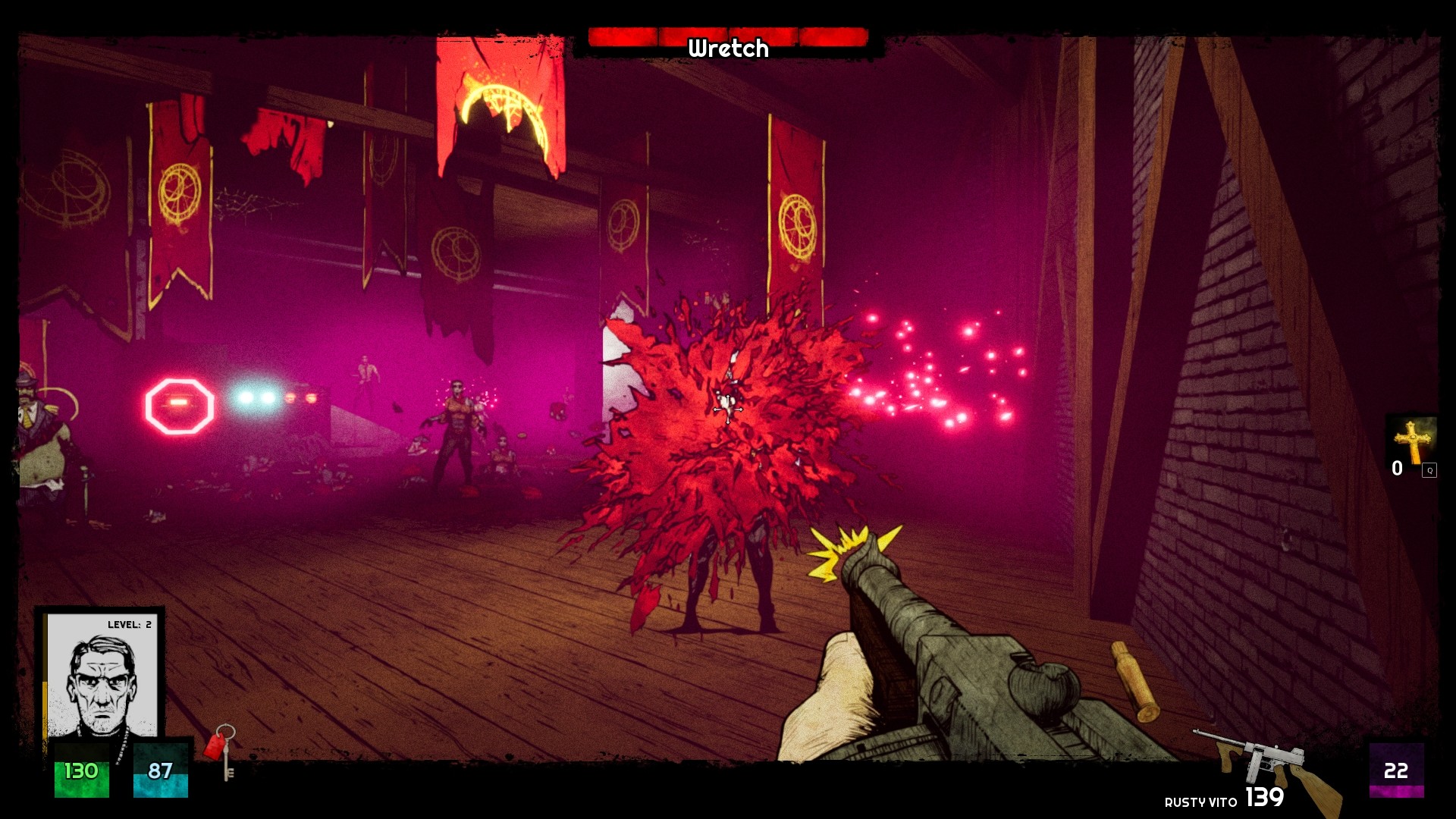 My run and gun play style was brought crashing to a halt as I found myself next to a blue phone box that was in the middle of a garden. It felt very out of place and my first thought was “Is this a Dr.Who Easter Egg?” As I kept playing, I discovered the game contained several Easter Eggs from other pop culture titles, and the second I found was a red balloon at a sewer grate… I’m just glad Pennywise didn’t jump out at me as I was low on ammo at this point. After I had noticed that this was going to be something extra to keep an eye out for, I explored everything.

Some were easy to spot, while others were background context on posters. My favourites were the Dark Souls ones. You enter a room and BAM! A Souls bonfire right in the middle of the room. On the same level, I noticed a poster that has “Praise the Night” with a ghoulish creature doing the praise emote from Dark Souls. It was a nice touch that gave Forgive me father an extra point.

The movement and aiming control for Forgive Me Father is quite sensitive, but I stuck with it and soon adjusted. I was able to see why the aiming movement needed to be fast as you can easily get surrounded in small rooms and need to snap around to mow down the crowds. Like the old school FPS games there is no reload button, you just pick up the ammo on the floor and it will go into the pool of ammo for the gun, but what Forgive Me Father does have is a skill tree to upgrade your guns, and some really do need the upgrade to be more user friendly… Looking at you, Tommy Gun with that hard recoil kick. 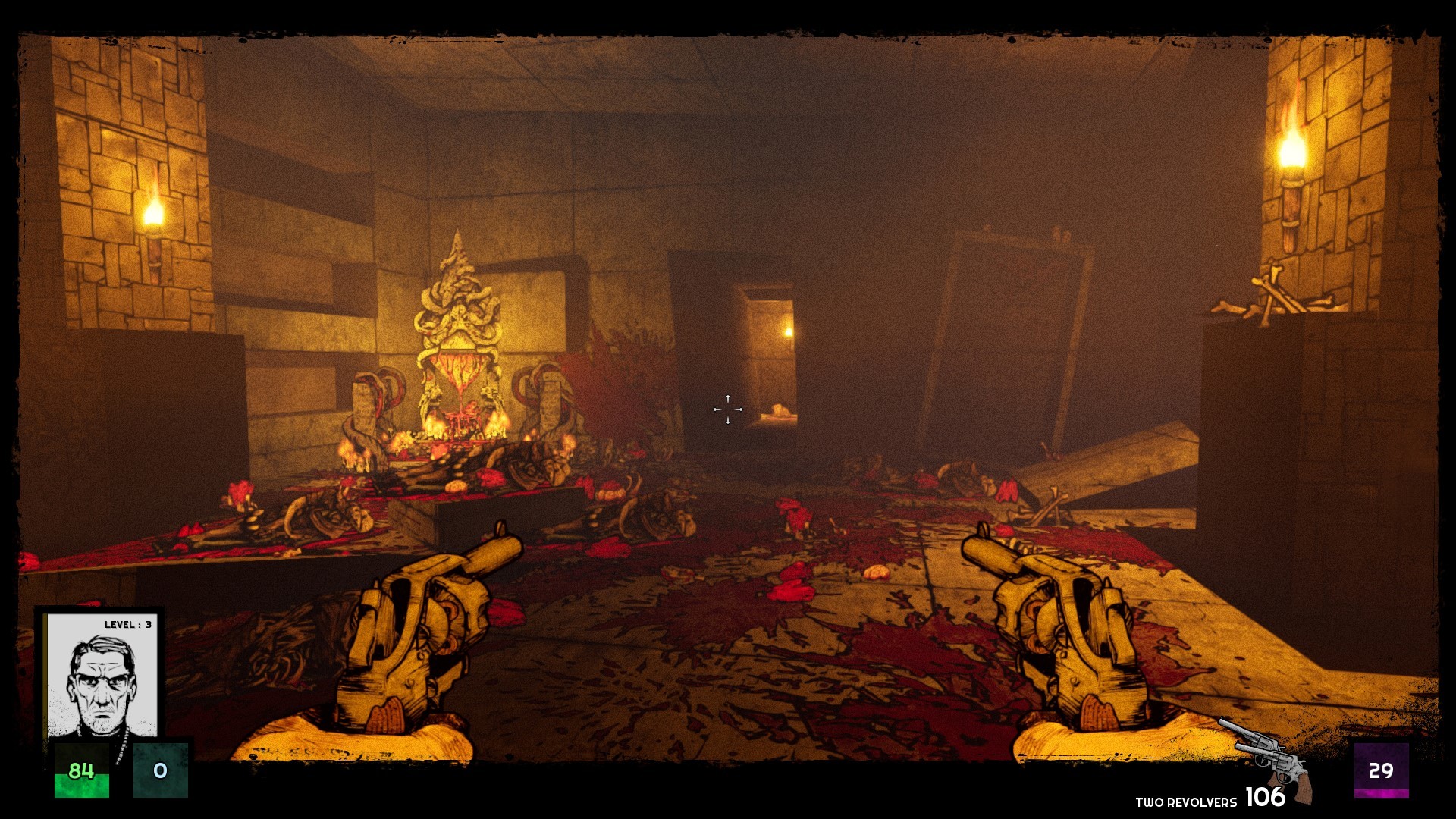 Visually I like the comic book style they went with as it blended in really well with the level’s colour palette. My only complaint is that when you are on a high killing spree, the screen will have a grey hue for a few seconds which made spotting some enemies in dark corners a lot harder than it should’ve been. The enemy designs are a copy and paste from each other with either a slight colour change or the addition of a hat. They are good designs, but nothing jumped out as being particularly threatening.

So, let’s get down to the audio. Firstly, there is basically no spoken dialogue and all the monsters sound the same, but what it lacks in dialect, it makes up for in its soundtrack. If you like running around and shooting monsters to heavy metal tunes then you will enjoy Forgive Me Father. A good soundtrack makes the time playing feel like it was worth it in my books, and I enjoyed my monster-killing spree while rocking to some great music.

In conclusion, Forgive Me Father is a fantastic throwback to the great shooters of old. They didn’t try to modernize it, they kept with the base roots of how the games were played back then and didn’t tamper with it. If you are an old-school Doom, Wolfenstein, or Quake player, do yourself a favour and check out Forgive Me Father. It will not disappoint. 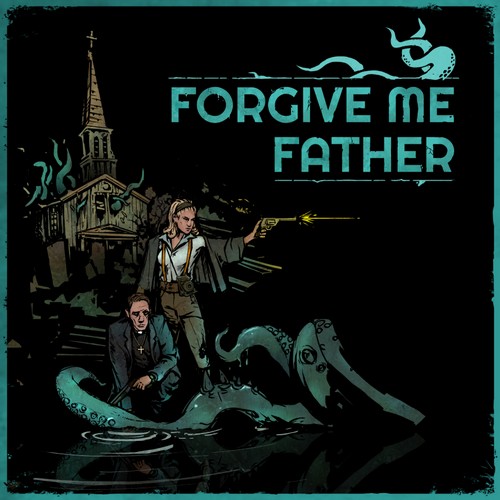 Forgive Me Father is a dark retro horror FPS set in a comic book style world inspired by the novels of H.P. Lovecraft. As the only one left with full senses, you begin a journey in search of answers and relief. How long can you last?